Note: The following is  The Lost Secrets of Maya Technology  excerpt (presented with permission from Publisher)

The Quest for Maya Technology Begins

As the dugout canoe slid through the swirling waters of the Usumacinta River, we were surrounded by the dense rainforest of Mexico. The Jungle was alive with a sight and sound show performed by its denizens.

I returned my gaze to the ruins in the river. I was sure that a bridge had once spanned this river. A bridge that was necessary for a riverine city of this magnitude. The technical prowess that was required to construct the bridge and the towering structures in the city was well beyond the capabilities of a Stone Age culture. A gap existed between reality and archeological belief. I was determined to find the truth. This was the beginning of my quest to unveil the lost technologies of the Maya.

It has long been an enigma how the Maya achieved such elevated scientific and technical levels in the isolation of a tropical rainforest. Why were the Maya so different from other ancient civilizations? They appear to be out of time and space. The Maya reached their height of greatness late in history and long after other the other great cradle civilizations had collapsed. In the tropical Yucatan they did not have the benefit of scientific contributions from other cultures. They were far distant from other cradles of civilization; they developed their own sciences independently. Their captivation with time and the movement of cosmic bodies were stimuli for the development of their accurate astronomy and elegant mathematics. In order to maintain accurate records of past and future cosmic events, a sophisticated written language was developed to record their calculations and ideas. Their written language is one of the most visually striking and was one of the world’s five original written languages. The development of sophisticated sciences led to the establishment of an elite intellectual class of scientists and their innovative technology grew out of a desire to construct luxurious cities that served as the power centers for a stratified society of royalty, priests, scientists, scribes, merchants, and artisans and the supporting specialty classes.

The ancient Maya were avid sky watchers. After millennia of observations of the heavens they gained an uncanny knowledge of the harmonious composition of the cosmos. Their interest in the vast expanse of the universe and the mysterious movements of the astral bodies evolved into their quadripartite philosophy of the cosmos This philosophy, combined with their fascination of the periodicity of the interlocking movements of the cycles of the sun, moon, planets and astral bodies, motivated Maya intellectuals to develop scientific disciplines enabling them to track heavenly bodies and predict astronomical events while maintaining accurate written records of them. They accurately calculated the time in days, months, and years of the periodic movement of astronomical bodies with greater precision than European astronomers until modern optical and digital instruments were available

Maya philosophers had the luxury of centuries of recorded time and a stable culture to enhance their profound thought process and develop their concept of a quadripartite universe. The Maya were bound by the principals, of space and time. Their concept of temporal cycling and logic viewed time in conjunction with the movement of astral bodies and related the astral periodicity to past, present and future events of Maya society.

The sophisticated astronomy, calendrics, mathematics and concise writing system produced by the genius of the Maya was inspired by their quadripartite cosmic philosophy. The Maya were obsessed with time. Their  calculations of temporal cycling included not only the quantity but also the quality of time. Their belief system recognized linear time, which is similar to viewing historical time periods, as well as the cyclical characteristics of time. This would be analogous to considering the concept of an event in time as “history repeating itself”. The Maya cosmic philosophy created an overview of the elements of time and the concept of a quadripartite universe,  by dividing the universe into four parts. (Thus the term quadripartite) The Maya viewed time as the undifferentiated past, present and future. To visualize this concept, its spatial geometry can be characterized as a four  dimensional mathematical model composed of time and the three spatial directions (X, Y, Z, t). The Maya overview of the principals of time, and the quadripartite universe is not unlike the concept of the spacetime continuum conceived by modern physicists.

This belief system enabled the Maya to look back in time to identify and date cosmic and historical events that could then be cycled forward to future dates and establish place marks in time for scheduling important events. This sophisticated scientific discipline enabled the Maya to: “Remember the future and to anticipate the past”. An example of this function would be the selection of an end date for the current Maya long count calendar cycle  which is 13.0.0.0.0. This date equates to December 21, 2012, which coincides with the date of the winter solstice.

More than a thousand years before Europeans landed on the shores of the Americas, the Maya developed a science based civilization in the isolation of the tropical hot?lands of the Yucatan peninsula. The towering skylines of  their magnificent cities loomed above the emerald rainforest. These architectural wonders detailed with magnificently carved facades, created awe inspiring spectacles, and were resplendent in artistic relief and hieroglyphic inscriptions. These sophisticated urban centers were the largest cities in the western world during the middle of the first millennium AD.

The intellectual elite class had the capabilities to solve abstract problems in technology that enabled the planning and construction of grand cities with buildings towering above the rainforest, reservoirs for storage of potable water, and paved roads that enabled travel in all types of weather. They built the longest bridge in the ancient world, and sea going cargo vessels that extended their trade routes for thousands of kilometers over the shining  seas.

Their scientific and technological achievements were more advanced than any other culture on the planet. They have been compared to the Egyptians for their use of hieroglyphic characters in their writing, to the Greeks for their development of advanced sciences, to the Romans for construction of well drained paved highways and to the Phoenicians for long range trading activities in sea going vessels. The Maya created written almanacs of solar and lunar cycles containing accurate predictions of eclipse cycles. Their almanacs charted cycles of Venus, Mars, Mercury, Jupiter, and Saturn with great precision.

The sprawling Maya city states were more than technically dazzling examples of art and architecture that were conceived to overwhelm the observer with a sense of wonderment. These grand cities were centers of power, incubators of science and technology, seats of learning, and the hub of big business operations that generated the wealth of the kingdom. The art festooned structures of these magnificent cities endured against all odds for more than a millennium after the demise of the Maya civilization. Resisting the degradation of the environment, the ravages of time, environmental disasters and the prying roots of the encroaching jungle, the longevity of the structures is attributed to the innovative Maya technology  employed in their construction. The cities were constructed of technologically advanced building systems that provided the glue that held their center together. In addition to the advanced construction techniques preserving their cities, this brilliant society evolved scientific advances and technological methodologies that were a millennium in advance of similar discoveries by European sciences.

Maya cities were planned and constructed on a grand scale with functional efficiency and artistic elegance. Each city, with its monumental palaces and temples, had a unique setting and the result was a triumph of the fusion of grace and power. The sophisticated Maya architecture is unlike any other style in the world, their imaginative character of design is alien and bizarre, and is dissimilar to that of any other Mesoamerican culture. What was the source of this unique Maya style? Like their advanced sciences and technology, their artistic style owes its inspiration to their veneration of the cosmos and its influence on the philosophy of the Maya. The Maya  civilization, one of history’s longest lived cultures, included more cities and pyramids than ancient Egypt. The Maya were governed by more than fifty independent City?States dispersed across the 125,000 square mile area of the Maya world. Their cities were the power base for the intellectual elite who ruled the city?states. The elite class of royalty, scribes, scientists, intellectuals and merchants, who energized the civilization for more than a millennium,  dwelt within the city centers. This was not just a society that existed in the annals of lost prehistory, where historical dating had to be performed by scientific data testing methods .The chronology of Maya historical events have been determined with exactitude by deciphering the written inscriptions and the accurate calendar system of the Maya. Their unique form of writing, once considered an unsolvable riddle, was undecipherable for more than a century after the re?discovery of the lost civilization, and did not become readable until the code was broken by brilliant epigraphers. The Mayan language and their thoughts were then made visible by this newfound ability to read their writing system. The unfolding of the chronological events of their history, their epic adventures of their royalty and their scientific message read like an exciting historical novel. The thoughts, history and accomplishments of the longest lived civilization in history became known to the world and chronicled the feats of their historic giants, who were not fanciful folk legends, but were real life people who, guided by their cosmic philosophy, ruled the political fortunes of the city states.

The Collapse of the Maya Civilization

This lost Maya civilization was the last great civilization to be discovered. Its architecture and technology had remained intact while slumbering for a millennium beneath jungle growth but the grand cities, abandoned in the 9th century, were never re?occupied by the Maya, or any other culture. The remains of the culture, its art and architecture, its technology and cities had degraded but were basically intact and available for study by explorers and experts. Archaeologists have studied the abandoned cities and the inscribed art and script that were carved into the facades of the Classic Period buildings. These inscriptions have provided abundant evidence of the accomplishments of this brilliant culture. Moreover, scientific accomplishments of the Maya have been revealed through translations of their surviving books and, carved inscriptions. Their achievements continue to astonish the academic world. However, scholarly research has completely overlooked the technological achievements of Maya engineers. These technological achievements were required to enable the survival, health, and favorable lifestyles of the inhabitants who populated the world’s densest urban centers.

Archaeology has studied the Maya civilization and marveled at their art and architecture, their vast cities, their rituals and royal lineages. They have recognized the brilliance of their pure sciences including astronomy,  mathematics, calendrics, and their distinctive writing system. However, archaeology still considers the Maya to be a “Stone Age” culture because they did not use metal tools. Archaeology has overlooked the brilliant and innovative technology that built the scientific Maya civilization.

A program of discovery and investigation using forensic engineering skills and digital tools was required to identify the tantalizing clues to Maya technology that lay hidden in plain sight. On?site discovery and scientific  analysis was required to develop a new archaeological perspective relative to the technology of the Maya. The investigation program was a success and assembled its conclusions into a mosaic of technological feats. The quest for answers to the riddle of Maya technology was achieved and science was rewarded with surprising discoveries of the lost technologies of the Maya.

Reprinted, with permission of the publisher, from THE LOST SECRETS OF MAYA TECHNOLOGY© 2012 James O’Kon. Published by New Page Books a division of Career Press,
Pompton Plains, NJ. 800?227?3371. All rights reserved.

The Lost Secrets of Maya Technology 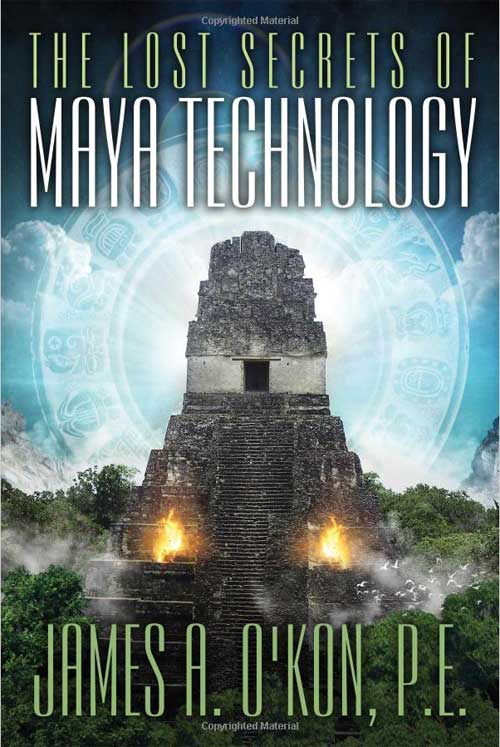