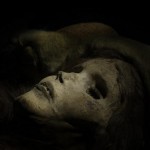 The Tarim Mummies: Ancient China and the Mystery of the Earliest Peoples from the West The Tarim mummies are a series of mummies discovered in the Tarim Basin in  Xinjiang, China, which date from 1900 BC to 200 AD.  In addition to being very well-preserved finds, controversy flows around them as DNA tests seem to show that they are the result of Asian and Caucasian mating … END_OF_DOCUMENT_TOKEN_TO_BE_REPLACED