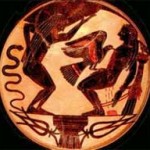 Prometheus is a Titan, culture hero, and trickster figure who in Greek mythology is credited with the creation of man from clay and the theft of fire for human use, an act that enabled progress and civilization. He is known for his intelligence, and as a champion of mankind. The punishment of Prometheus as a consequence of the theft is a major theme of his mythology, … END_OF_DOCUMENT_TOKEN_TO_BE_REPLACED