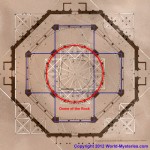 The Dome of the Rock in Jerusalem The Dome of the Rock is a shrine located on the Temple Mount in the Old City of Jerusalem. The structure has been refurbished many times since its initial completion in 691 CE at the order of Umayyad Caliph Abd al-Malik. The site's significance stems from religious traditions regarding the rock, known as the Foundation Stone, at its … END_OF_DOCUMENT_TOKEN_TO_BE_REPLACED