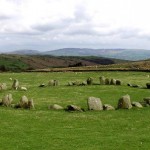 Introduction According to hypothesis of British authors Alan Butler and Christopher Knight, and French author Sylvain Tristan,  megalithic civilization of Britain and Britanny, France used  366-degree geometry (also called megalithic geometry).  This geometry, whose origin is claimed to go back to c. 3,000 BC, would have used a 366-degree circle rather than a 360-degree circle … END_OF_DOCUMENT_TOKEN_TO_BE_REPLACED