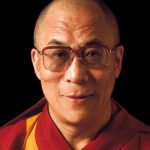 By The Dalai Lama The Washington Post, Opinions, 13 June 2016 << The 14th Dalai Lama, Tenzin Gyatso, is the spiritual leader of Tibet. Since 1959, he has lived in exile in Dharamsala in northern India. Almost six decades have passed since I left my homeland, Tibet, and became a refugee. Thanks to the kindness of the government and people of India, … END_OF_DOCUMENT_TOKEN_TO_BE_REPLACED