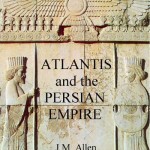 Atlantis was part of a mighty empire with a fleet of 1,200 ships and a vast army which it sent against Athens. Could these have sailed from a continent the size of Asia and Libya combined which existed in the Atlantic Ocean? They didn’t need to. Herodotus tells us the army of Xerxes and the Persian Empire tallied 1,200 ships and was routed by the Greeks with Athens at their … END_OF_DOCUMENT_TOKEN_TO_BE_REPLACED