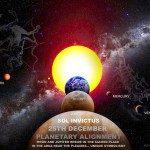 Prophecies and December 2012 Planetary Alignments by Wayne Herschel Anchor: "Wouldn't it be a strange situation if humanity had to band together, fighting alongside Russia, or I guess, the Taliban?" Springer: "It would, but keep in mind that many of the greatest civilizations in human history have been formed, basically, to counter a common enemy. When you look at the great … END_OF_DOCUMENT_TOKEN_TO_BE_REPLACED