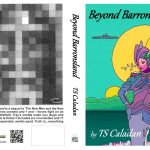 How can I explain 'Beyond Barronsland'? A sequel to 'The New Men and the New World' that was better, more intriguing, took the idea of parallel worlds to its Outer Limits. How many sequels surpassed the original? Not many. My 11th novel was a departure from how I've written books previously. I'll get a small idea, come up with chapter titles, then fill in the story … END_OF_DOCUMENT_TOKEN_TO_BE_REPLACED

Hopi Creation Myth The world at first was endless space in which existed only the Creator, Taiowa. This world had no time, no shape, and no life, except in the mind of the Creator. Eventually the infinite creator created the finite in Sotuknang, whom he called his nephew and whom he created as his agent to establish nine universes. Sotuknang gathered together matter from the … END_OF_DOCUMENT_TOKEN_TO_BE_REPLACED