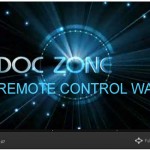 Remote Control War "This started as a documentary about military robots and ended up more like a science fiction film,” says Remote Control War director Leif Kaldor. “The technology is almost unbelievable, yet very few people know there are thousands of robots on the battlefield right now, let alone what the next generation of lethal, autonomous robots will be capable … END_OF_DOCUMENT_TOKEN_TO_BE_REPLACED