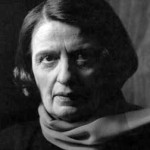 Ayn Rand was Wrong! by Doug Yurchey      Someone should have shown this anti-Socialist and super-Capitalist an episode of Star Trek!       Ayn Rand (1905-1982) was a Russian novelist, best known for ‘The Fountainhead’ (1943) and ‘Atlas Shrugged’ (1957).  She developed a philosophy called ‘Objectivism’ and had been interviewed by the likes of Mike Wallace, Johnny Carson and … END_OF_DOCUMENT_TOKEN_TO_BE_REPLACED