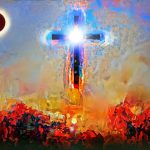 by David Pratt By the middle of the 2nd century, a battle was raging between gnostic and literalist Christians. The latter attacked the gnostics as heretics who had perverted genuine Christianity, whereas the truth is that Literalism is a degenerate form of the original Jesus mysteries of the gnostics. In the face of gnostic insistence that the Jesus story was a mystical … END_OF_DOCUMENT_TOKEN_TO_BE_REPLACED