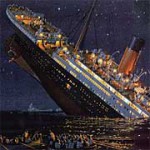 Insane Coincidences: The "Titanic" Disaster Story A hundred years before release of James Cameron's movie "Titanic" (1997), American writer Morgan Robertson wrote a book called "Futility, or the Wreck of the Titan". The book was  about the sinking of an "unsinkable" ocean liner. No surprise there; it's a story that's been told over and over (there were 13 Titanic … END_OF_DOCUMENT_TOKEN_TO_BE_REPLACED