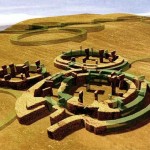 Built in 9,000 BC is 6,500 years older than Stonehenge. It has been considered the world's oldest temple and even thought by some to be the site of the Garden of Eden. The purpose of the structures is not yet clear. Excavator Klaus Schmidt believed that they had been early neolithic sanctuaries. Göbekli Tepe is an archaeological site at the top of a mountain ridge in … END_OF_DOCUMENT_TOKEN_TO_BE_REPLACED