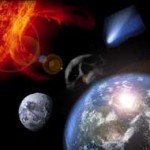 The 2012 doomsday became one of the most controversial subjects of the XXI century. The Internet is saturated with thousands of catastrophic predictions and apocalyptic prophecies.  Some proponents of 2012 suggest that instead of end of life we will experience a shift in our collective consciousness level... Many religions state that the end of time is to arrive soon. The … END_OF_DOCUMENT_TOKEN_TO_BE_REPLACED