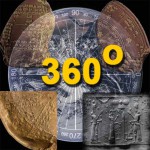 Introduction The Columbia Encyclopedia, in its article titled "Civilization," says that the earliest civilizations developed in the following parts of the world: Mesopotamia, Egypt, China, India, the central Andes, and Mesoamerica. A traditional theory of the spread of civilization is that it began in the Fertile Crescent and spread out from there by influence. However, … END_OF_DOCUMENT_TOKEN_TO_BE_REPLACED