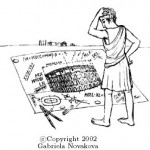 Mathematics of the Past by Garry Kasparov Garry Kasparov won the title of the Chess World Champion in 1985 - at the age of 22. He was the world No.1 ranked player for 255 months, by far the most of all-time and nearly three times as long as his closest rival, Anatoly Karpov.In 1997, during a historical chess challenge that made headlines all over the world, he defeated IBM's … END_OF_DOCUMENT_TOKEN_TO_BE_REPLACED