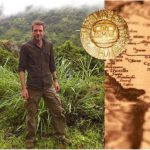 by Ashley Cowie PART 2... BELIEVED TO BE A GIFT FROM THE CREATOR GOD VIRACOCHA, INCA PRIESTS IN THE TEMPLE OF THE SUN IN CUZCO, PERU, USED THE GOLDEN SUN DISC TO CONTROL THE SPIRITUAL HEALTH OF THEIR ENTIRE EMPIRE. The Golden Sun Disk was used to control 41 ceke lines (energy lines) which emanated from the Temple across the entire Inca territory which were believed … END_OF_DOCUMENT_TOKEN_TO_BE_REPLACED