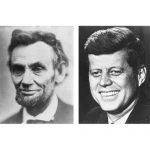 U.S. Presidents Abraham Lincoln and John F. Kennedy are a piece of American folklore of unknown origin. The list of coincidences appeared in the mainstream American press in 1964, a year after the assassination of John F. Kennedy, having appeared prior to that in the G.O.P. Congressional Committee Newsletter. Martin Gardner examined the list in an article in Scientific … END_OF_DOCUMENT_TOKEN_TO_BE_REPLACED