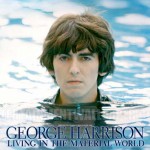 Taking its name from George Harrison's 1973 album, Living In The Material World is Martin Scorsese's epic and affectionate two-part documentary on the life of the mercurial and inquisitive former Beatle who died in 2001. George Harrison: Living in the Material World was released on DVD, Blu-ray and Limited Deluxe Edition, which includes the DVD, Blu-ray, book of unseen … END_OF_DOCUMENT_TOKEN_TO_BE_REPLACED