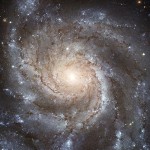 The galaxy Messier 101 (M101, also known as NGC 5457 and also nicknamed the Pinwheel Galaxy) lies in the northern circumpolar constellation, Ursa Major (The Great Bear), at a distance of 25 million light-years from Earth. This is one of the largest and most detailed photo of a spiral galaxy that has been released from Hubble. The galaxy's portrait is actually composed of 51 … END_OF_DOCUMENT_TOKEN_TO_BE_REPLACED