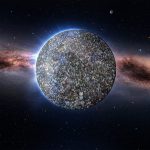 Estimates of  "the total number of people who have ever lived" published in the first decade of the 21st century range approximately from 100 to 115 billion. According to estimates by demographic researchers at the Population Reference Bureau (PRB), as of 2015, there have been 108.2 billion who have ever been born. Taking away the roughly 7.4 billion who are alive today, we … END_OF_DOCUMENT_TOKEN_TO_BE_REPLACED