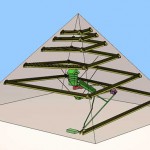 Unlocking The Great Pyramid Of Cheops Many archeologists have struggled for years trying to figure out how the great pyramid of Cheops (AKA Khufu) was built, many theories came out but most of them did not cover several facts, and had several question marks around them. Back in 2007 the genius French architect Jean-Pierre Houdin revealed his theory about how the pyramid was … END_OF_DOCUMENT_TOKEN_TO_BE_REPLACED