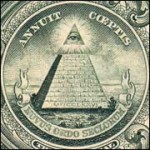 When you look up at the Great Pyramid, it's apex is missing. It is flap topped and not pointed like a pyramid should be.  Usually, when a pyramid was constructed, the top part, or capstone (also called top-stone), was the last thing to be placed on it. It was considered the most important part of the pyramid and was made of special stone or even gold. The capstone was usually … END_OF_DOCUMENT_TOKEN_TO_BE_REPLACED