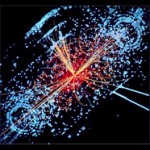 Faster than light? CERN findings bewilder scientists Physicists at the lab near Geneva say they've observed subatomic particles moving faster than the speed of light. If confirmed, it would defy Einstein — and upend our understanding of physics. Albert Einstein had the idea. A century of observations have backed it up. It's one of the cornerstones of physics: Nothing travels … END_OF_DOCUMENT_TOKEN_TO_BE_REPLACED