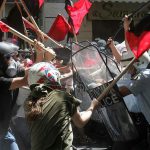 by Dan Green One day after the horrific killing of a priest in France on July 27th 2016, Pope Francis stated that, ‘The world is at war’, referring not to a war of religions but a war of ‘interests, a war for money, resources and domination of peoples.’ What I intend to pluck and highlight from his selected areas of concern is the emphasis on resources, which, of course has … END_OF_DOCUMENT_TOKEN_TO_BE_REPLACED