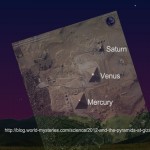 2012 and the Pyramids at Giza... by Charles Marcello I happen to be one of those people who believes nothing is going to happen in 2012. However, in order to prove that to myself, I have been studying this issue for about four years now.  While studying ancient cultures I noticed that each of them had a fascination with the planets. The stars are mentioned of course, but … END_OF_DOCUMENT_TOKEN_TO_BE_REPLACED