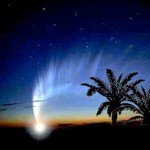 First evidence of comet striking Earth believed found in Egypt A team of scientists claims to have found the first-ever definitive evidence of a comet striking Earth. After conducting a series of analyses, the researchers determined that a mysterious black pebble discovered years ago in the Egyptian desert is a piece of a comet nucleus — the first ever discovered.     [ad … END_OF_DOCUMENT_TOKEN_TO_BE_REPLACED