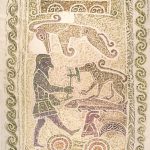 by Ashley Cowie In 1945 a hyper-excentric catastrophist published the most bizarre conspiracy theory of all time. Plato's legendary Atlantis thrived in Scotland before being destroyed by a comet impact, and in ancient times the capital city Edinburgh was the real Jerusalem. Movies such as Armageddon and Deep Impact have engrained the concept of Earth being obliterated … END_OF_DOCUMENT_TOKEN_TO_BE_REPLACED