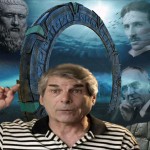 Revelations of Tray Caladan (Doug Yurchey) by T. S. Caladan       Russians put me on a UFO-type television show this February.  They read my "Inspiration for the World Grid" article on World-Mysteries and asked to interview myself and psychic wife.  The show concerns Atlantis and they wanted to feature my old theory of Tesla and the World Grid.  (The ‘ex-wife’ passed in … END_OF_DOCUMENT_TOKEN_TO_BE_REPLACED