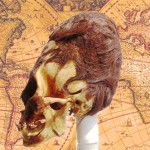 The Red-haired Race by Leonard Farra The Guanches were the people living in the Canary Islands before the Spanish conquest in the 15th century. Although it’s believed that they were related to the North African Berbers, we should bear in mind that they were of mixed race. Some, who were a brownish shade, were of the Mediterranean Race and as others were tall, white, fair or … END_OF_DOCUMENT_TOKEN_TO_BE_REPLACED