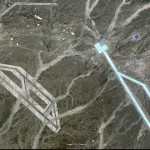 Mysterious Nazca-like Site near Dunhuang in China Dunhuang is a city (pop. 187,578 (2000) in Jiuquan, Gansu province, China. It was a major stop on the ancient Silk Road. It was also known at times as Shachou, or 'City of Sands'. It is situated in a rich oasis containing Crescent Lake and Mingsha Shan, "Echoing-Sand Mountain". Mingsha Shan is so named for the sound of the wind … END_OF_DOCUMENT_TOKEN_TO_BE_REPLACED