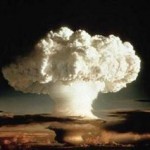 1961 Goldsboro B-52 crash:How a single switch prevented biggest man-made disaster in human history  The 1961 Goldsboro B-52 crash was an accident that occurred near Goldsboro, North Carolina, on 24 January 1961. A B-52 Stratofortress carrying two Mark 39 nuclear bombs broke up in mid-air, dropping its nuclear payload in the process. The captain ordered the crew to eject, which … END_OF_DOCUMENT_TOKEN_TO_BE_REPLACED