What was the Real Purpose of Newgrange?

Kieran Comerford B.E., M.B.A., qualified in electrical engineering and worked for a number of multinational companies, and then at the Institute for Industrial Research and Standards in Dublin, Ireland.  He experienced a profound change from the rigid scientific mode of thinking after he learned to meditate in 1979 and went on to learn a number of healing techniques. He is the author of “Newgrange and the New Science: Exploring the subtle energies of Ireland’s ancient Neolithic monument”, “The Christian’s Dilemma: A guide to the new spirituality”, and a number of technical books. He recently retired from lecturing at the National Institute of Technology Management in University College Dublin and gives talks on science and spirituality. 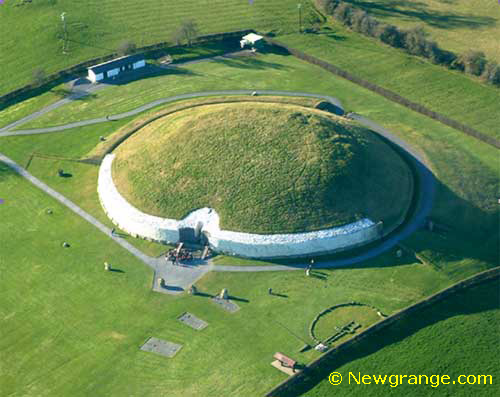 Newgrange is one of the 1,500 ancient sites in Ireland. It is a World Heritage Site and is popularly known because on the 21st December each year, at sunrise on the day of the winter solstice, the sun penetrates its 25 metre long passage and illuminates the inner cruciform chamber. Every year a lottery is held to choose a small number of people who are privileged to witness this phenomenon.

I believe that this development programme started in Carrowmore, Sligo in 3550 B.C. This consisted of a large dolmen with a 30 tonne capstone covered in a large mound of loose stones. Perhaps it was considered that a larger mound would be more effective so Knocknarea was built with 70,000 tons of stones. From here the development may have moved to Carrowkeel with its mountain top site in visual contact with Knocknarea. Here we see a large number of smaller cairns and the first sign of solar alignment. 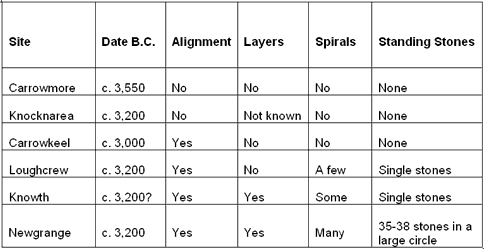 Comparison of features of the sites from Carrowmore to Newgrange

When the features of the various sites are laid out in tabular form above, some idea of the stages of development can be gained. It is clear that as one moves from Carrowmore to Newgrange, features such as solar alignment, layers of different kinds of materials and spiral designs on stones appear at various stages on this south-easterly journey. The sites appear to be almost contemporaneous but 100 years is a long time for a human but well within the margin of error of carbon dating. There appears to be a progression in time and there is certainly a progression in sophistication.

Newgrange is noted for the number of spiral designs carved on the kerbstones around the cairn. Inside the chamber is a famous triple spiral design which is illustrated below 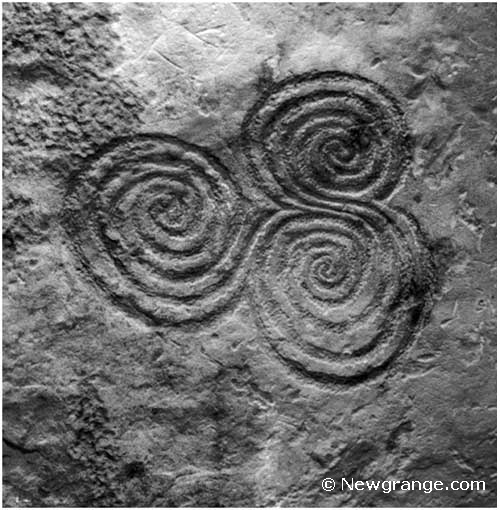 The triple spiral design in the Newgrange chamber

The spiral is also recognised in physics as having fundamental properties. James Clerk Maxwell devised his vortex atom theory based on the demonstrations by Lord Kelvin of smoke rings, a toroidal form of the spiral. Victor Schauberger developed his implosion theories based on the concept of energy being forced to spin in a spiral formation where, because of the conservation of angular momentum it was forced to spin faster and faster until, as Schauberger said, it entered higher dimensions. Russian scientists have been studying these ideas for many years and have recognised the existence of torsion fields which accompany electromagnetic radiations of all frequencies. These fields based on spin can alter any biological substance and may be the basis of healing energy1.

The spiral has a mystical significance as well as a physical one. It represents the journey from the inner to the outer, from the diversity of the world to the experience of unity.  The chambers in many sites have been found to be conducive to meditation and shamanistic rituals and vision quests2.

It can be seen from the table above that the later sites of Knowth and its neighbour Newgrange contained layers of different materials. No archaeologist has been able to offer any credible explanation for these layers. In Newgrange, As can be seen below, there are alternate layers of loose stones and sods of earth.  This diagram is taken from Professor Michael O‘Kelly’s book on Newgrange which catalogues the excavation and restoration of Newgrange between 1962 and 19753. 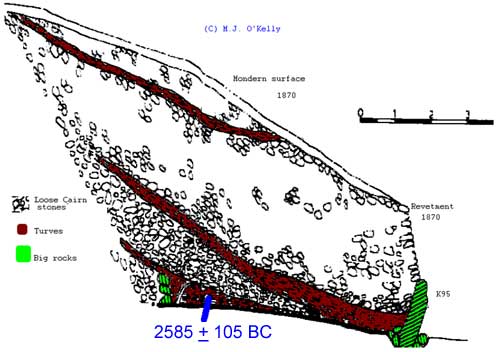 We can conclude therefore that Newgrange was the first orgone accumulator and was probably used as a concentrator of healing energy. Study of the neighbouring and slightly earlier site of Knowth suggests that with its seventeen satellite mounds it was used for testing various prototypes of construction. The subject is expanded and explained in depth in my book “Newgrange and the New Science: Exploring the subtle energies of Ireland’s ancient Neolithic monument”. More information is available from http://www.kcomerford.com/books/newgrange.html 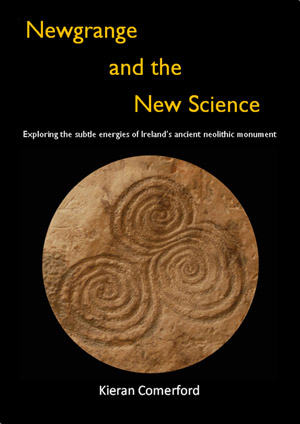 Kieran Comerford, engineer and research and development manager spent eight years investigating the purpose for which Newgrange was built. He concluded that this Neolithic World Heritage Site in County Meath, Ireland represented the culmination of a huge project which began in County Sligo and progressed south-eastwards through a series of developments. Each of these intermediate monuments became more sophisticated and Newgrange represented the perfection of an ancient technology which has been lost. Newgrange was not built just to tell the time of the winter solstice. It functioned throughout the year and the science and technology behind its main purpose is revealed in this book. Bringing together knowledge from a wide range of sources Kieran explains how we can understand and benefit from this “New Science”, but science itself, as we know it, must change to accommodate these old, and now rediscovered ideas.