Most people know about Nazca Lines  however another, less known,  unexplained mystery in Peru is located near Pisco Valley on a plain called Cajamarquilla.

Unexplained Band of Holes near Pisco Valley in Peru

Thousands of man-sized holes are carved into the barren rock.  These strange holes, stretching for a mile over uneven mountain terrain, were here for so long that the local people have no idea who made them, or why. Funny thing is no one really saw the big picture until the area was seen from the air.  Archeologists have speculated they were dug to store grain in. Two problems with this, say the folks thinking out of the box:  there were a lot easier ways to create storage containers than the hard work and decades it must have taken to chip out all of these, and it would have made more sense, if these were to store grain, to build several huge chambers. OK, said the archeologists.  Perhaps they were used as one-person tombs? Vertical graves of  some sort? But no bones, artifacts, scraps, inscriptions, jewelry…not even a tooth or strand of hair has been found in them. They have no covers to seal them as you might a tomb and no sacred history or even myth was passed down to label them as such.  Some sections have holes in rigid and perfect precision; some run in rows that curve up in arches, some staggered lines. They vary in depth to about 6-7 feet deep yet some are merely shallow indents as if not completed – though surrounded by those that are.  To date, no one has a clue why they’re here, who made them or what they were. 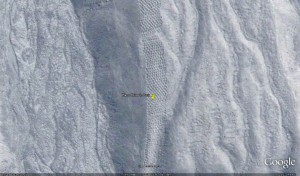 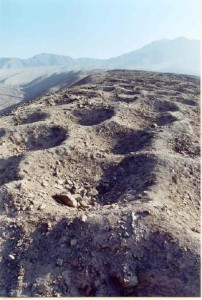 Even von Daniken’s work begins to take on a realness when one finds an old National Geographic from 1933 corroborating the “Band of Holes,” that he personally inspected a few years ago. Each hole is a meter wide and just as deep. There are eight holes spanning 24 meters in width, marching in repetitive uniform fashion, from the Pisco Valley rolling over a mile through mountain terrain — finally disappearing in the misty mass of Peru. These holes remind this old West Texas boy of the traces left by a massive drilling rig moving along methodically, testing the geology of the Andes for precious metals. Lasers have also left such tracings in the ground. Archaeologists say they represented defensive positions or graves for the ancient ones, except why would you bury anyone on a slope in rocky soil at more than a 45-degree angle?

If you look at the most northern part of the band, you will notice that it ends within unnaturally darkened area (it almost looks like a remnants of an explosion)…

Few miles east from the band of holes, satellite photo shows structures that look like a remnants of an ancient settlement (these formations do not look natural and there is nothing similar in the entire area): 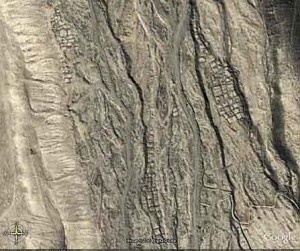 Nazca Lines are the most outstanding group of geoglyphs in the world. Etched in the surface of the desert pampa sand about 300 hundred figures made of straight lines, geometric shapes and pictures of animals and birds – and their patterns are only clearly visible from the air.  More about Nazca Mystery >>