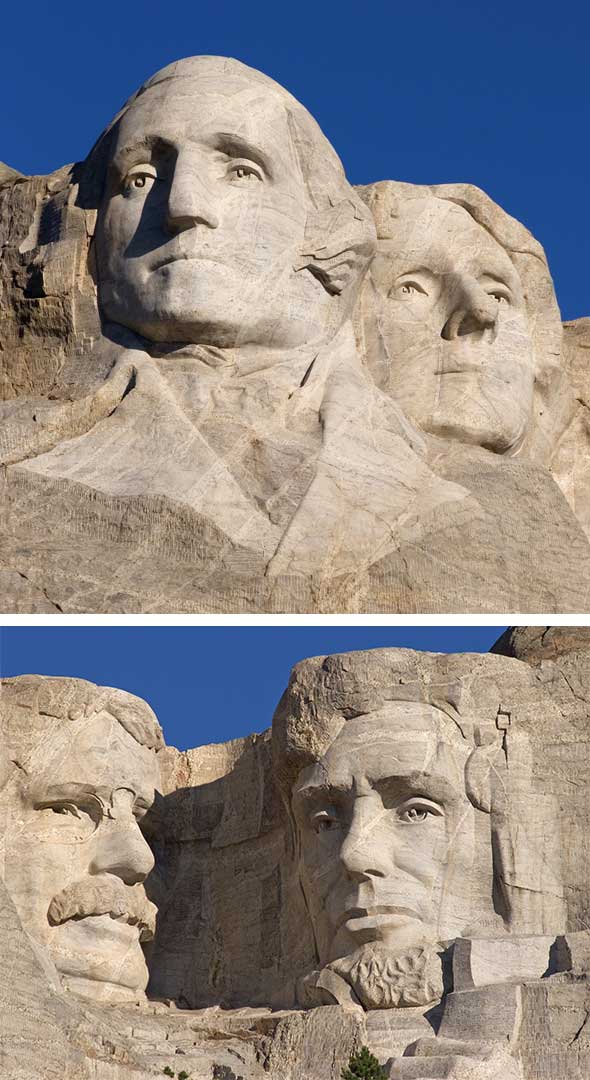 South Dakota historian Doane Robinson is credited with conceiving the idea of carving the likenesses of famous people into the Black Hills region of South Dakota in order to promote tourism in the region. Robinson’s initial idea was to sculpt the Needles; however, Gutzon Borglum rejected the Needles site because of the poor quality of the granite and strong opposition from environmentalists and Native American groups. They settled on the Mount Rushmore location, which also has the advantage of facing southeast for maximum sun exposure. Robinson wanted it to feature western heroes like Lewis and Clark, Red Cloud and Buffalo Bill Cody but Borglum decided the sculpture should have a more national focus, and chose the four presidents whose likenesses would be carved into the mountain. 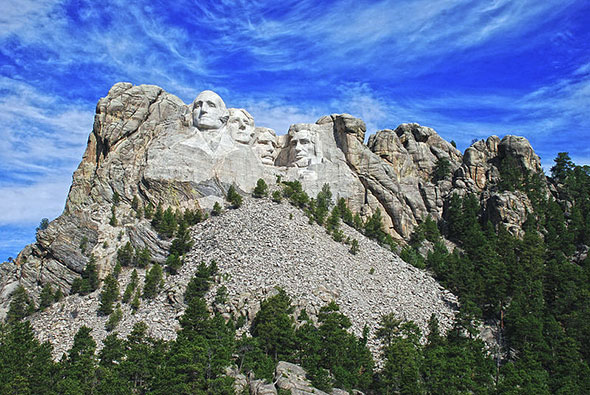 After securing federal funding, construction on the memorial began in 1927, and the presidents’ faces were completed between 1934 and 1939. Upon Gutzon Borglum’s death in March 1941, his son Lincoln Borglum took over construction. Although the initial concept called for each president to be depicted from head to waist, lack of funding forced construction to end in late October 1941.
The U.S. National Park Service took control of the memorial in 1933, while it was still under construction, and has managed the memorial to the present day. It attracts nearly three million people annually. 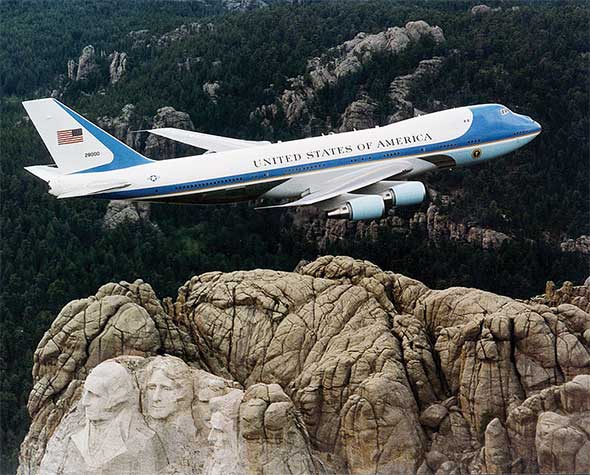 Originally known to the Lakota Sioux as Six Grandfathers, the mountain was renamed after Charles E. Rushmore, a prominent New York lawyer, during an expedition in 1885. At first, the project of carving Rushmore was undertaken to increase tourism in the Black Hills region of South Dakota. After long negotiations involving a Congressional delegation and President Calvin Coolidge, the project received Congressional approval. The carving started in 1927, and ended in 1941 with no fatalities. 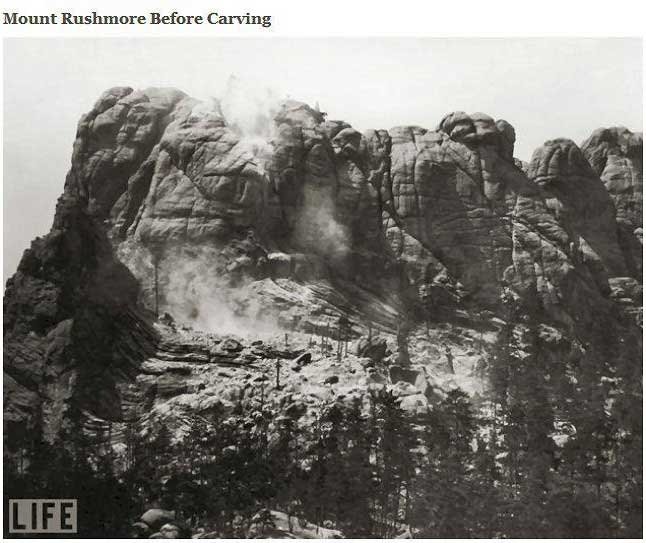 As Six Grandfathers, the mountain was part of the route that Lakota leader Black Elk took in a spiritual journey that culminated at Harney Peak. Following a series of military campaigns from 1876 to 1878, the United States asserted control over the area, a claim that is still disputed on the basis of the 1868 Treaty of Fort Laramie (see section “Controversy” below). Among American settlers, the peak was known variously as Cougar Mountain, Sugarloaf Mountain, Slaughterhouse Mountain, and Keystone Cliffs. It was named Mount Rushmore during a prospecting expedition by Charles Rushmore, David Swanzey (husband of Carrie Ingalls), and Bill Challis.

Historian Doane Robinson conceived the idea for Mount Rushmore in 1923 to promote tourism in South Dakota. In 1924, Robinson persuaded sculptor Gutzon Borglum to travel to the Black Hills region to ensure the carving could be accomplished. Borglum had been involved in sculpting the Confederate Memorial Carving, a massive bas-relief memorial to Confederate leaders on Stone Mountain in Georgia, but was in disagreement with the officials there. The original plan was to perform the carvings in granite pillars known as the Needles. However, Borglum realized that the eroded Needles were too thin to support sculpting. He chose Mount Rushmore, a grander location, partly because it faced southeast and enjoyed maximum exposure to the sun. Borglum said upon seeing Mount Rushmore, “America will march along that skyline.” Congress authorized the Mount Rushmore National Memorial Commission on March 3, 1925. President Coolidge insisted that, along with Washington, two Republicans and one Democrat be portrayed.

Between October 4, 1927, and October 31, 1941, Gutzon Borglum and 400 workers sculpted the colossal 60 foot (18 m) high carvings of U.S. presidents George Washington, Thomas Jefferson, Theodore Roosevelt, and Abraham Lincoln to represent the first 150 years of American history. These presidents were selected by Borglum because of their role in preserving the Republic and expanding its territory. The image of Thomas Jefferson was originally intended to appear in the area at Washington’s right, but after the work there was begun, the rock was found to be unsuitable, so the work on the Jefferson figure was dynamited, and a new figure was sculpted to Washington’s left. 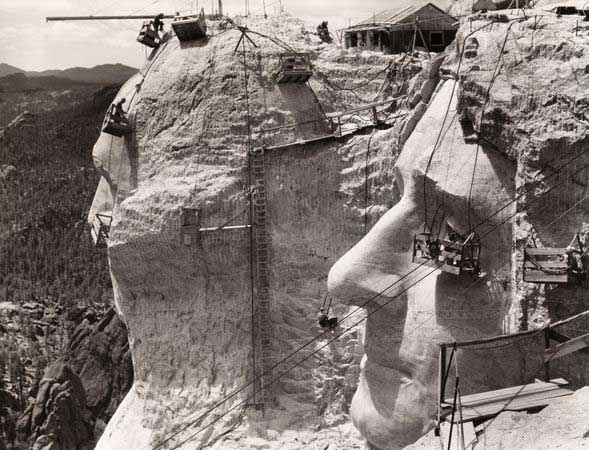 In 1933, the National Park Service took Mount Rushmore under its jurisdiction. Julian Spotts helped with the project by improving its infrastructure. For example, he had the tram upgraded so it could reach the top of Mount Rushmore for the ease of workers. By July 4, 1934, Washington’s face had been completed and was dedicated. The face of Thomas Jefferson was dedicated in 1936, and the face of Abraham Lincoln was dedicated on September 17, 1937. In 1937, a bill was introduced in Congress to add the head of civil-rights leader Susan B. Anthony, but a rider was passed on an appropriations bill requiring federal funds be used to finish only those heads that had already been started at that time. In 1939, the face of Theodore Roosevelt was dedicated.

The Sculptor’s Studio — a display of unique plaster models and tools related to the sculpting — was built in 1939 under the direction of Borglum. Borglum died from an embolism in March 1941. His son, Lincoln Borglum, continued the project. Originally, it was planned that the figures would be carved from head to waist, but insufficient funding forced the carving to end. Borglum had also planned a massive panel in the shape of the Louisiana Purchase commemorating in eight-foot-tall gilded letters the Declaration of Independence, U.S. Constitution, Louisiana Purchase, and seven other territorial acquisitions from Alaska to Texas to the Panama Canal Zone.

The entire project cost US$989,992.32.
Notable for a project of such size, no workers died during the carving.

On October 15, 1966, Mount Rushmore was listed on the National Register of Historic Places. A 500-word essay giving the history of the United States by Nebraska student William Andrew Burkett was selected as the college-age group winner in a 1934 competition, and that essay was placed on the Entablature on a bronze plate in 1973. In 1991, President George H. W. Bush officially dedicated Mount Rushmore.

In a canyon behind the carved faces is a chamber, cut only 70 feet (21 m) into the rock, containing a vault with sixteen porcelain enamel panels. The panels include the text of the Declaration of Independence and the Constitution, biographies of the four presidents and Borglum, and the history of the U.S. The chamber was created as the entrance-way to a planned “Hall of Records”; the vault was installed in 1998.
Ten years of redevelopment work culminated with the completion of extensive visitor facilities and sidewalks in 1998, such as a Visitor Center, the Lincoln Borglum Museum, and the Presidential Trail. Maintenance of the memorial requires mountain climbers to monitor and seal cracks annually. Due to budget constraints, the memorial is not regularly cleaned to remove lichens. However, on July 8, 2005, Alfred Kärcher GmbH, a German manufacturer of pressure washing and steam cleaning machines, conducted a free cleanup operation which lasted several weeks, using pressurized water at over 200 °F (93 °C).

Mount Rushmore is controversial among Native Americans because the United States seized the area from the Lakota tribe after the Great Sioux War of 1876. The Treaty of Fort Laramie from 1868 had previously granted the Black Hills to the Lakota in perpetuity. Members of the American Indian Movement led an occupation of the monument in 1971, naming it “Mount Crazy Horse”. Among the participants were young activists, grandparents, children and Lakota holy man John Fire Lame Deer, who planted a prayer staff atop the mountain. Lame Deer said the staff formed a symbolic shroud over the presidents’ faces “which shall remain dirty until the treaties concerning the Black Hills are fulfilled.”
In 2004, the first Native American superintendent of the park was appointed. Gerard Baker has stated that he will open up more “avenues of interpretation”, and that the four presidents are “only one avenue and only one focus.”

The Crazy Horse Memorial is being constructed elsewhere in the Black Hills to commemorate the famous Native American leader and as a response to Mount Rushmore. It is intended to be larger than Mount Rushmore and has the support of Lakota chiefs; the Crazy Horse Memorial Foundation has rejected offers of federal funds. However, this memorial is likewise the subject of controversy, even within the Native American community. 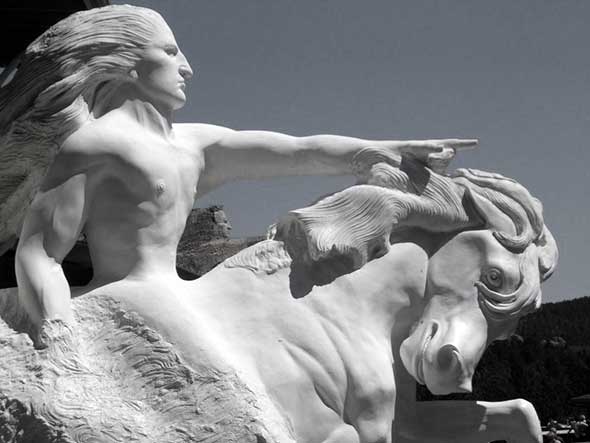 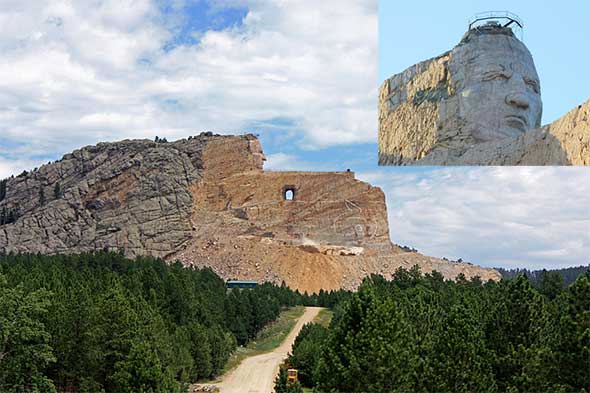 The monument also provokes controversy because some[who?] allege that underlying it is the theme of racial superiority legitimized by the idea of Manifest Destiny. The four presidents chosen by Borglum were all active during the period when the United States was annexing Native American land. Gutzon Borglum himself excites controversy, because he was a member of the Ku Klux Klan.[12][27]
In May 2012 James Anaya, a United Nations special rapporteur on the rights of indigenous peoples, conducted the United Nations’ first-ever investigation into the plight of Native Americans living in the United States. Anaya’s recommendations include advising the U.S. to return some land to Native American tribes, including South Dakota’s Black Hills.