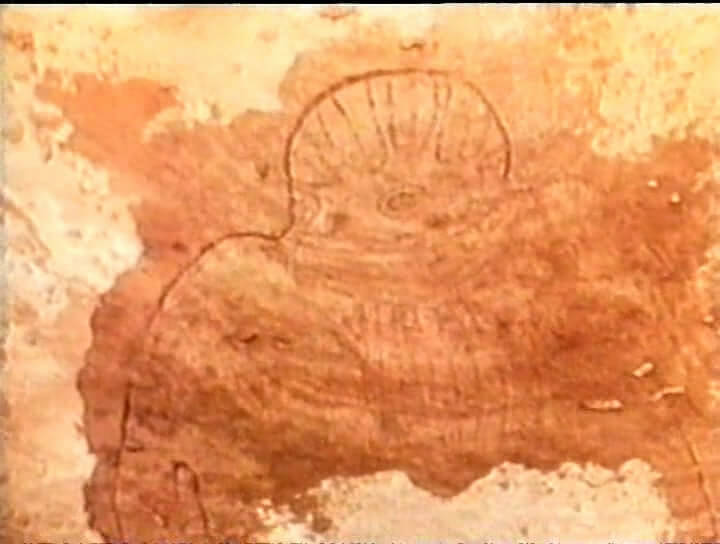 Tassili n’Ajjer (English: Plateau of the Rivers) is a heavily eroded sandstone rock formation in the Algerian section of the Sahara Desert, situated on a vast plateau, that encompasses south-east Algeria, western Libya and northern Niger. 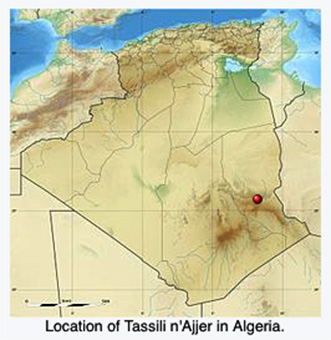 According to many researchers and the ancient astronaut theory, the mysterious cave paintings of Tassili could prove to be the best evidence of extraterrestrial beings present on Earth in the distant past. The incredible cave paintings are found in the Tassili Plateau, southern Algeria in the arid desert of the Sahara. Tassili n’Ajjer means ” Plateau of the Rivers.” 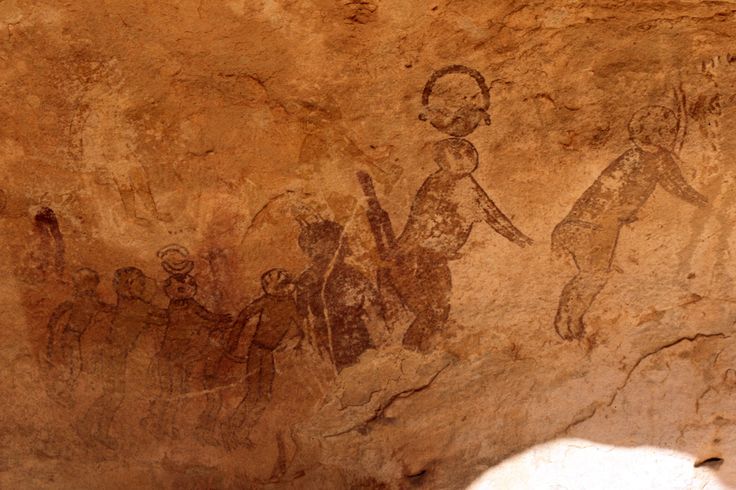 Around 8000 BC, ancient people of Africa represented their everyday lives through the cave paintings, among animals, plants, the ancient people also depicted strange beings that are unlike anything in the region. Researchers have catalogued over 5000 cave paintings, even though they believe that there were much more in the past.

Through these paintings, researchers speculate that the Sahara region was completely different 4000-6000 yeas ago; it was a region overflowed with life.

According to researchers, the cave paintings of Tassili, are one of the most important ancient collections of rock art known today; regrettably, only 20% of them remain visible as the majority of these incredible cave paintings have been destroyed by erosion. Experts believe the cave paintings to be between 10,000 and 15,000 years old. Experts suggest that cave paintings of that time were usually done with a single shade of color, the Tassili cave paintings, however, used several colors which make them even more special to history. There are countless species depicted in the caves; among them are giraffes, ostriches, elephants, oxen, alligators and even hippos; demonstrating that the Sahara region was full of life in the distant past.

There are many interesting details about the cave paintings of Tassili; nomadic people assert that these caves are an ideal living environment even today. According to the depictions, rivers, jungles, animals and numbers plants were not foreign to the area, experts suggest that they might have been located in the vicinity of the caves. The painting also seems to reflect a pattern of occupation in the caves with different activities performed by the ancients in specific historical periods. Hunting and Fishing around 7000 BC, animal husbandry around 4,000 BC and horse domestication around 1.500 BC.

There are numerous mysterious surrounding the ancient inhabitants of the Tassili Caves. Archaeologists have not been able to find burial sites in the area, but the most incredible feature are perhaps the mysterious depictions of strange beings with helmets and suits, resembling modern-day astronauts according to many researchers.

These mysterious depictions have fueled debate among researchers. Why would they depict; rivers, jungles, and animals native to the region in the past, and then depict something that they did not see (according to mainstream archaeology): the strange humanoid figures with helmets and suits? The ancient people of the Tassili Caves portrayed their everyday life and their experiences; they did not invent these humanoid figures, which in some cases, are even depicted with mysterious antennas on their helmets. 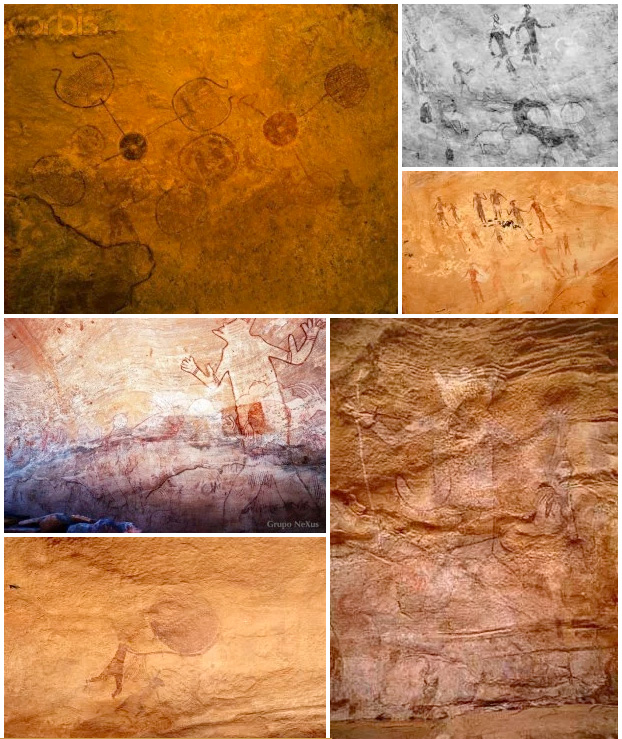 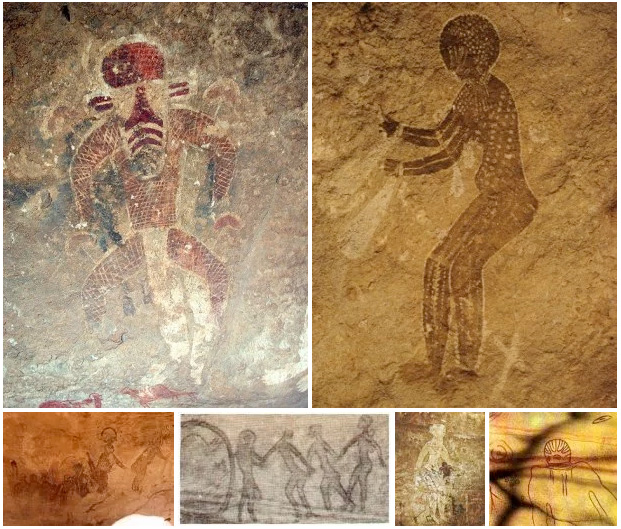 In 1976, a Spanish expedition traveled to the Sahara to investigate the mysterious cave paintings of Tassili. After analyzing the numerous cave paintings, the Spanish researchers concluded that Extraterrestrial beings regularly visited Earth in the distant past and that extraterrestrial beings had regular contact with the ancient inhabitants of the region. According to them, one of the cave paintings illustrates several women being taken to a mysterious looking craft.

Next to some of the symbols, researchers have identified a set of symbols which has led experts to speculate that some sort of writing system existed in the area 5000 years ago. This was something mainstream archaeology has a hard time accepting since it changes their official thesis suggesting that Mesopotamia is the cradle of civilization and writing.

The mysterious beings with gloves, boots, and helmets are also seen in the Azyefú, Ti-n-Tazari, and Sefar region.

Many believe that the cave paintings of Tassili are evidence of beings who visited making in the distant past. Sky beings who came to earth thousands of years ago and left their mark in history through the stories and decisions of ancient civilizations worldwide.