A MYSTIFYING ANCIENT PRE-COLOMBIAN ARTEFACT DISPLAYING UNIDENTIFIABLE LIFEFORMS IS NEITHER A HOAX OR A MISINTERPRETATION. IT’S A CLASSIC OOPART (OUT-OF-PLACE ARTEFACT) DATED TO HUNDREDS OF MILLIONS OF YEARS OLD AND IT DEFIES HISTORY AS WE KNOW IT. OR DOES IT?

In South America gold has been a vastly important commodity for prehistoric and contemporary people for at least 5’000 years. The Muisca civilisation considered it as incorruptible because it doesn’t oxidise or change without human intervention. It is extremely malleable (easy to shape) and its ethereal reflective brilliance were both properties which the Muisca civilisation associated with the sun. 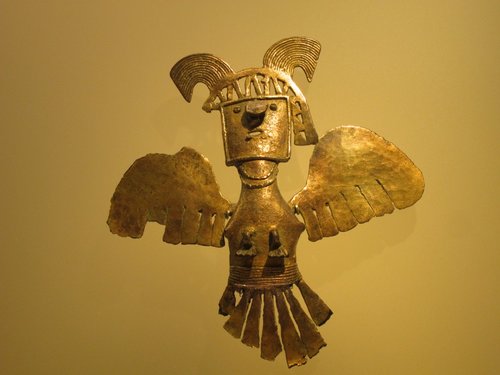 Pre-Colombian shaman in the form of a bird, created by lost-wax casting with tumbaga, circa 1200 B.C.E.

Muisca people crafted gold to a level of excellence which is unrivalled by any other prehistoric culture in the Americas. They attributed gold with curative properties and mystical powers and tribal leaders and shamans displayed huge quantities of it to enhance their social status. Shamans were considered to be conduits between the natural and supernatural worlds and they were often represented on finely worked gold ornaments and jewellery combining human and animal features, as seen in the opposite photograph.

Furthermore, the indigenous people of prehistoric Colombia mixed gold with a copper alloy called tumbaga which has a lower melting point than gold making it easier to work with. It also has a reddish color which was a perfect metaphor for the rising or setting sun. Gold was associated with male principals like immortality and the sun, and copper was associated with mortality and femininity. Therefore, Items crafted from tumbaga were regarded as a spiritual union of men and women. By 2000 B.C.E the Muisca people had developed a moulding technique that is still used today: lost-wax casting.

The artefact in question (illustrated below) is a tool which was once utilised in the production of gold jewellery and ornamentation. It has seven raised carvings depicting humans and unidentifiable lifeforms which were used to mould nearly identical wax models, which were then cast by the lost-wax process.

Good end-to-end examples of the lost-wax method of shaping gold are illustrated in the following two photographs. From the Gold Museum in Bogota, the image on the left depicts a finished gold pendant sitting upon the sculptured model stone from which it was crafted. An army of almost identical gold pendants surround it and to the left you can see the finished ceremonial neckwear. The right hand photograph is an example of a carved stone which was dedicated to forging animal models. 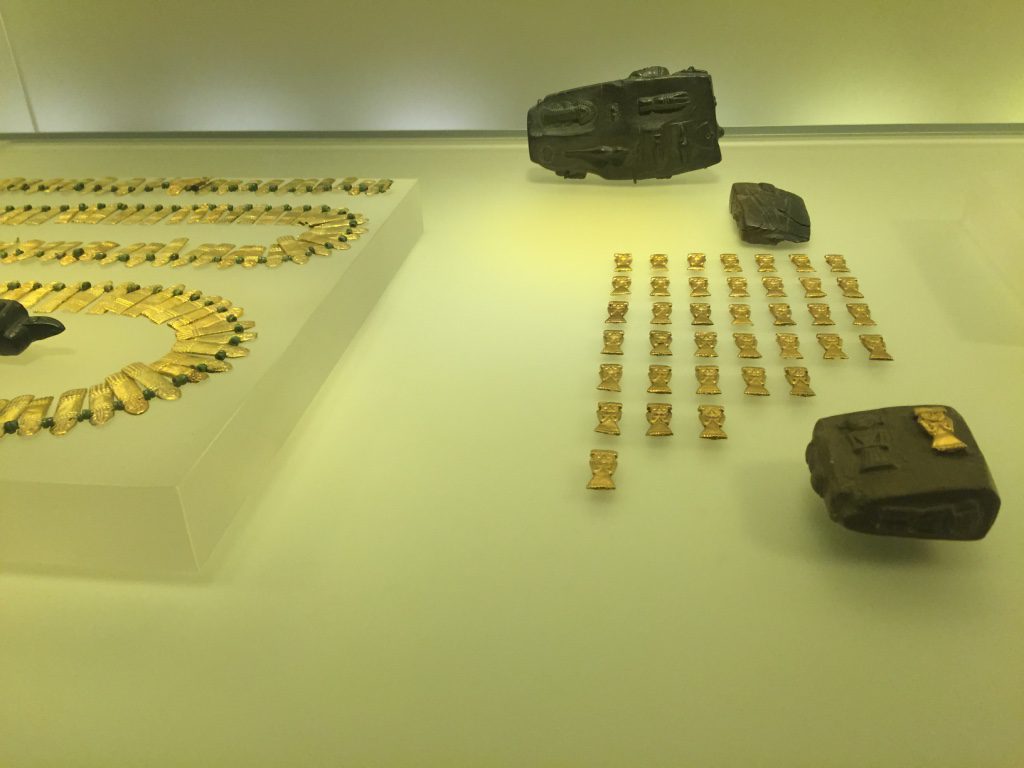 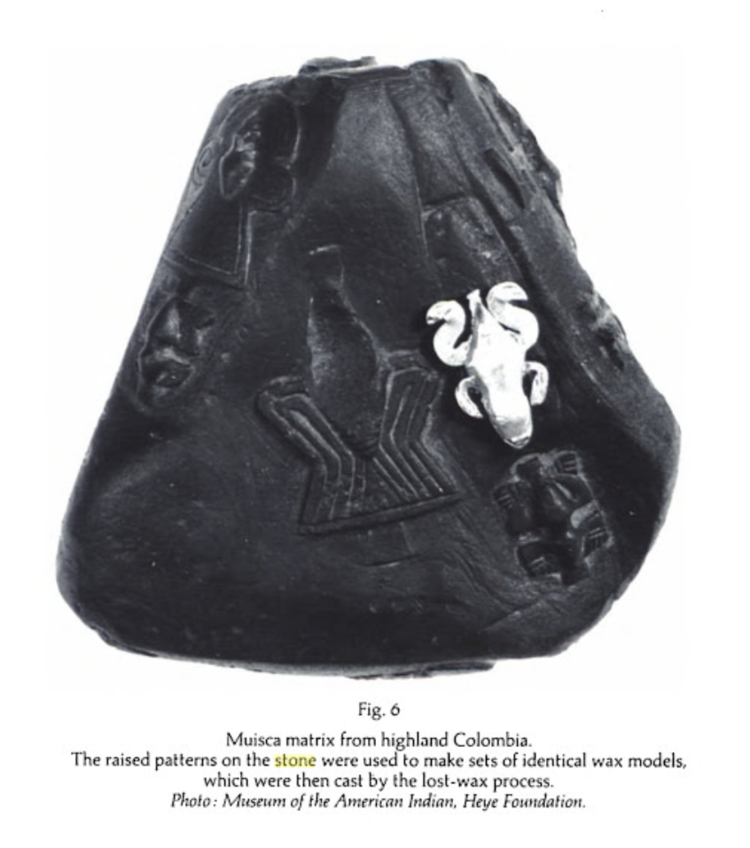 The artefact is forged from a very hard, dense stone, matt black in colour with a milky smooth texture. Its owner claims it is a piece of lydite, also known as touchstone. My knowledge of South American geology was not sufficient enough to question him at the time, but proponents of OOPArts often get over excited about lydite and with an air of suspense they claim it is one of the hardest substances on the planet.

They often follow this with “we cannot recreate such accurately executed carvings on lydite today!” However, the Romans chipped incredibly intricate statues and pillars from lydite. It is hard, but not that hard.

The two sides of the tool depict a stylised human adult opposite an unidentifiable life-form, most probably a stylised baby wrapped in a blanket. This interpretation is supported when we look closely at the details of the two human figures. Above the necklace worn by the figure in the right hand photograph is an inverted triangle which is symbolic of the female reproductive organs. The left hand figure doesn’t have this triangle, therefore these figures are female and male adults. If the unidentifiable lifeforms are indeed babies, the edges of this stone tell the story of the transition from baby to adult.

The male figure doesn’t have a triangle carved above the necklace.

The triangle above this figures necklace identifies it as a female adult.

Turning our attention to the faces of the artefact, the problems begin to arise.

One face depicts two unidentifiable life forms; a bug eyed creature with no arms and legs and the other has a human head with folded arms and two legs, but four toes on each foot, as illustrated in the opposite photograph. 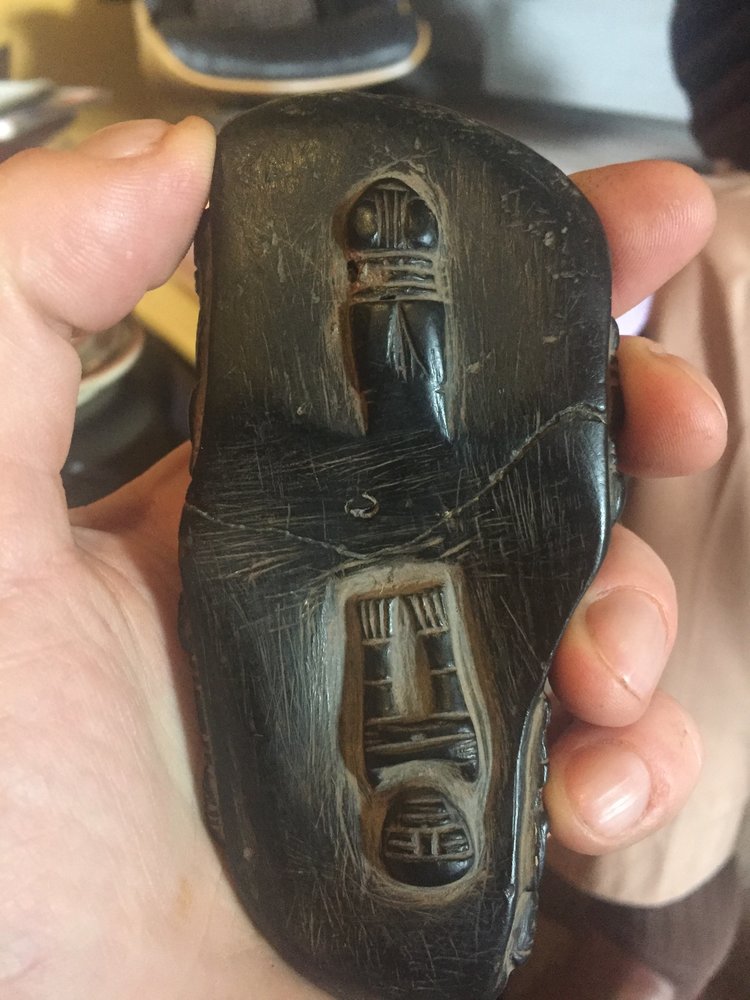 IT’S WHEN WE FLIP THE STONE OVER WE SEE WHY IT’S AN OOPART. 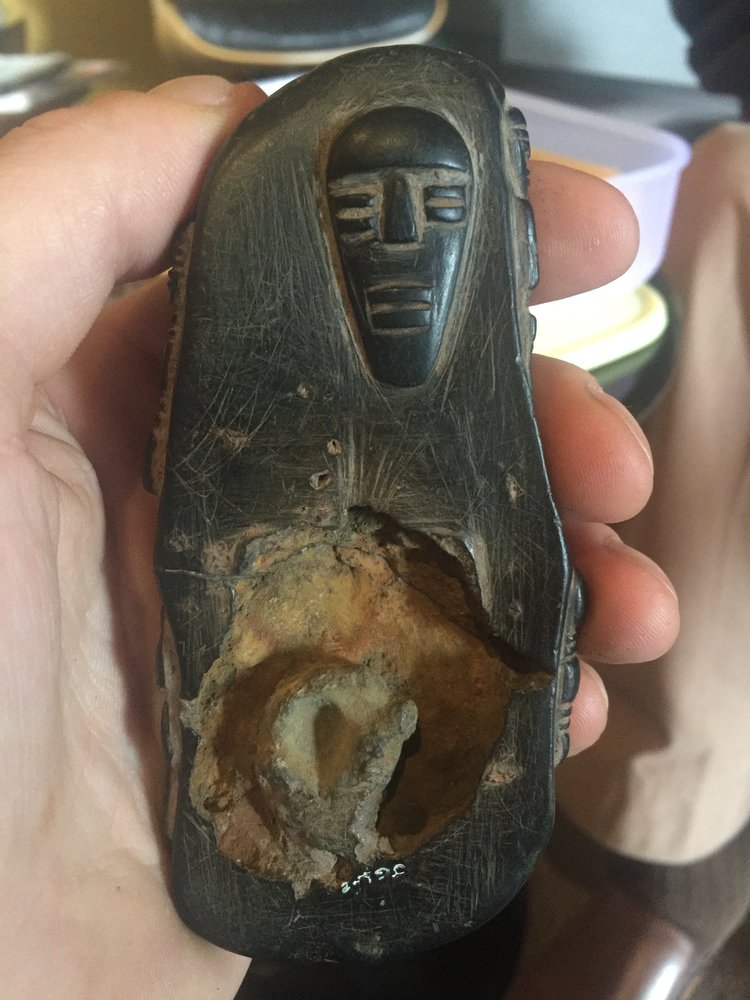 It’s not the wide head with slitted eyes and a tapered chin that raises the difficult questions. It’s the fissure enclosing a metallic ring that is the big problem.

Look closely at the marks around the head in the opposite photograph. It is surrounded by thin shallow lines created by the repeated insertion of a sharp blade, which was pushed beneath newly formed wax models to prise them from the stone. 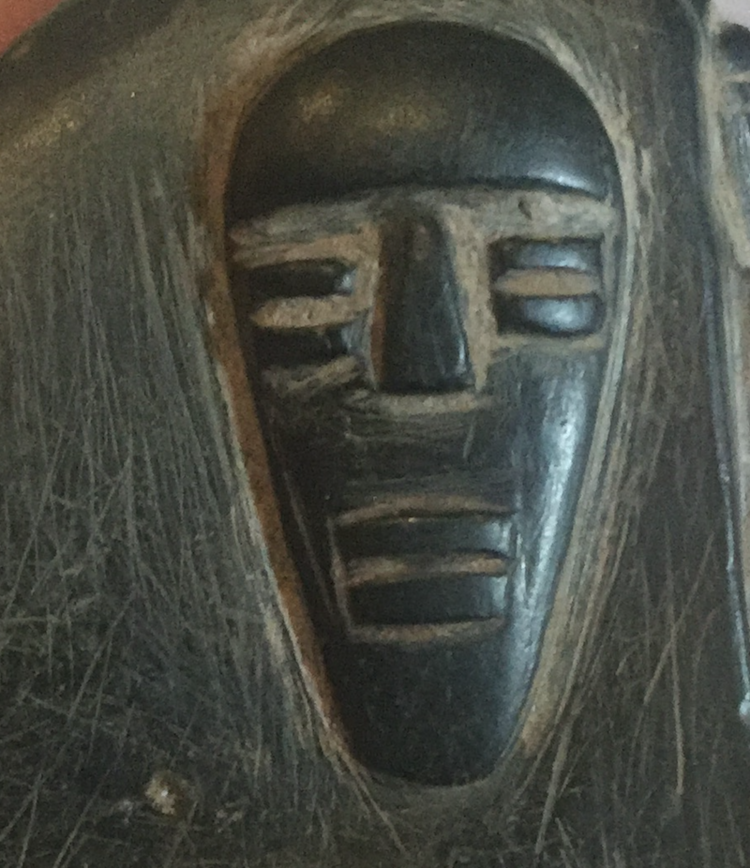 Hundreds of lines surround the raised figures which are caused by a blade which was used to prise the wax models form the stone. 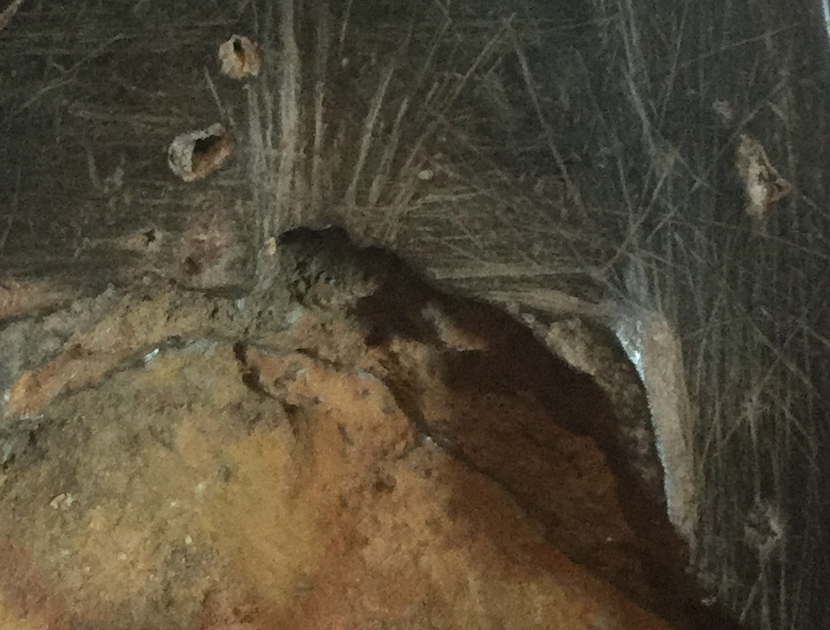 Many lines terminate at the edge of the hole suggesting it was covered at one time.

e metal Many lines terminate at the edge of the hole telling us that the hole was originally covered and featured a raised model. Therefore, this face of the stone follows the symbolic schematic of the rest of the stone – two stylised lifeforms on each face.

The problem seems to have occurred ever since a geologist from Bogota, who recently examined the artefact, told to the owner:

I can say little about the nature of the carvings, but this fissure has been exposed for hundreds of millions of years.

The owner of the artefact is now struggling to reconciliate these two contrasting facts: a. lines terminating at the edge of the hole determine it once featured a model. b. a geologist claims the fissure has been exposed for hundreds of millions of years.

This paradox has convinced the owner that his OOPArt is hard evidence of the existence of an advanced civilisation on Earth using high technology, hundreds of millions of years ago.

When presented with fringe historical theories like this, which conflict with my personal beliefs, I remind myself that to reject an idea without proper investigation and examination, is as ignorant as blindly believing ideas without the attainment of sufficient evidence. As alluring as these ideas are I can say confidently from many years of experience that a vast majority of OOPArts are either hoaxes or misinterpretations. But until this artefact is officially dated it could be argued that it was created by pink unicorns on Mars, in the future.

The weakest link in the logic chain surrounding this artefact is the geologist who claims the fissure has been exposed for millions of years. Therefore, I petitioned the owner to allow me to take the artefact to a University geology department to have it dated. Essentially,  I just wanted to have the fissure analysed in a controlled scientific environment, by a scientist of my choosing. Unfortunately the artefact is not insured for transit but the owner has openly invited me to take a geologist to his property to examine it. His uber confidant invite is actually quite stirring. He is 100% convinced it was created by a human millions of years ago.

I’m currently arranging to take a geologist to see the artefact and I will update the results to my mailing list as soon as this meeting takes place.

IN THE MEANTIME, LETS ASK THE SECOND DIFFICULT QUESTION. WHAT ON EARTH IS THE METALLIC RING WITHIN THE ARTEFACT? 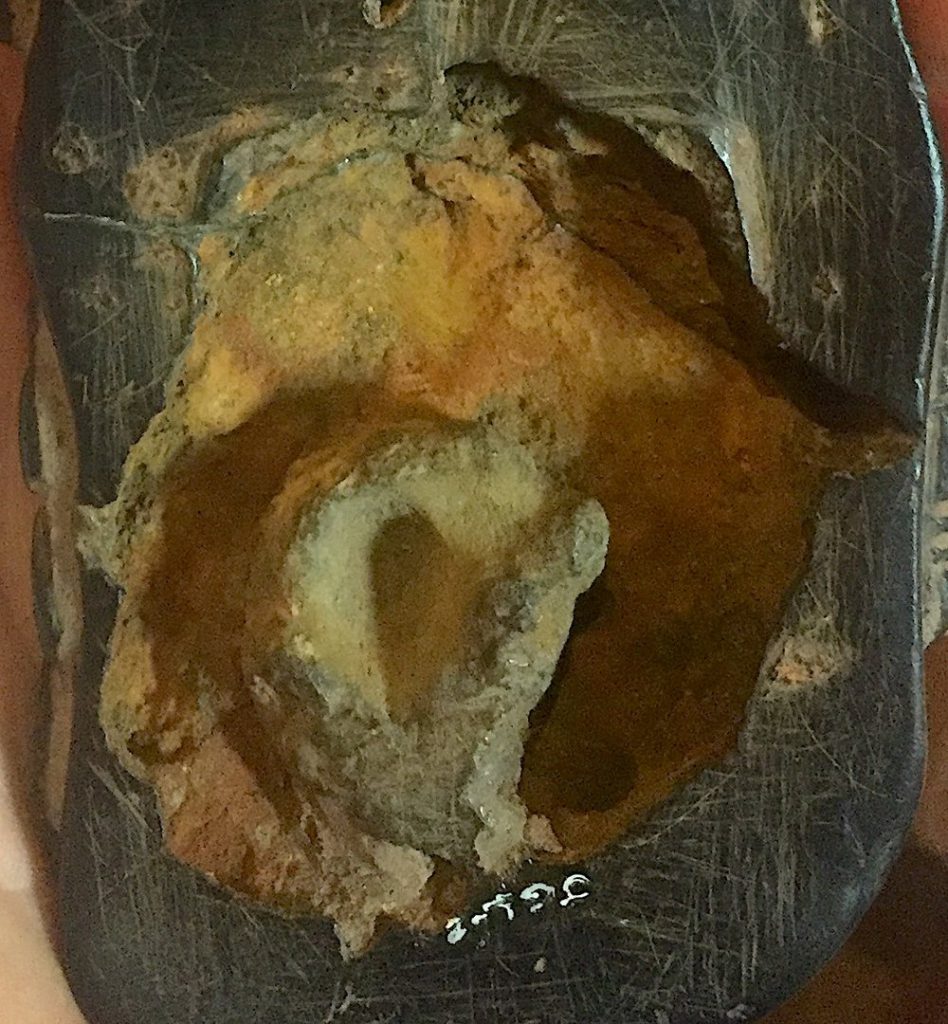 An unidentified metallic ring is encased within the artefact, currently defying scientific explanation.

The metal has a blueish hue suggesting copper, but when scratched it shines like aluminium. I tasted it and got nothing. There are three principal questions surrounding this ring which require answers.

Since the publication of the original article I have had a geologist attempt to explain how this metallic ring was formed. He claims lydide contains a lot of iron and that over time it has built up and threatened the integrity of the stone. Once the stone had been carved with a model for making wax moulds, it was only a matter of time before the weakened section of stone broke out. The claim that the corroded section had been exposed to open air for millions of years is not verifiable, and highly unlikely, and it is far more probably the corrosion happened before the section of stone fell away from the body of the rock.

If you have answers to any of these questions, or any observations you think might help solve the mysteries associated to this artefact, please send an email to Ashley through the Contact page.

The fall edition of 1961 MAGAZINE features a 10 page interview with Ashley discussing his research projects, television documentaries and new books.

If you are asked for a code to login use: JLYG8N 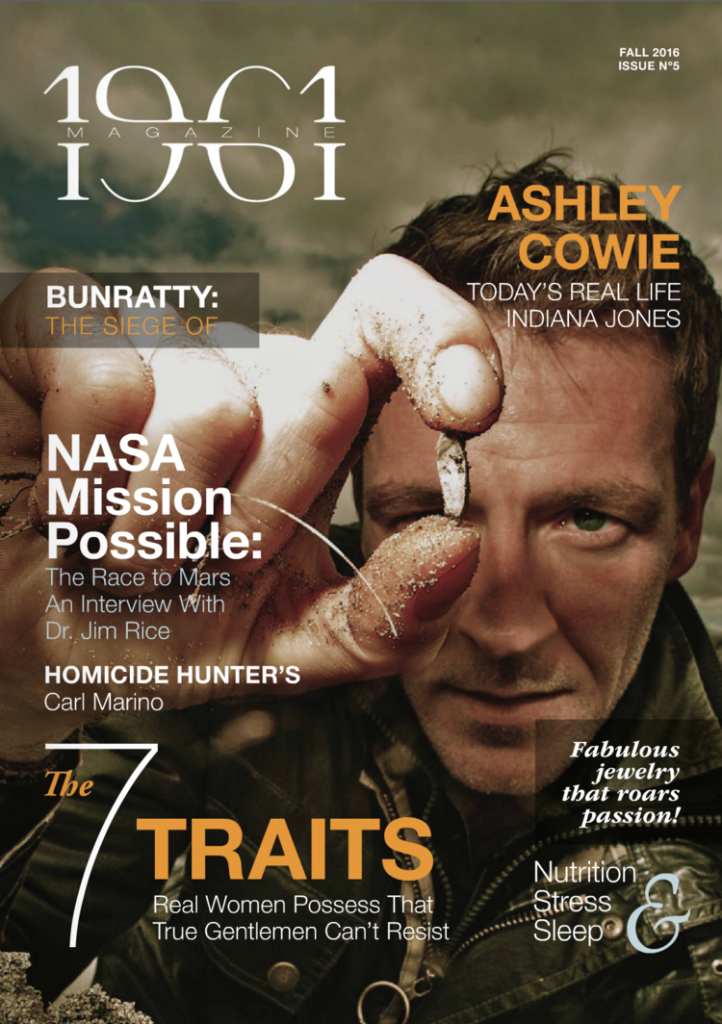