Note: The following article is part of series of articles/excerpts from “MAN AND HIS PLANET – An Unauthorized History” by James E. Strickling.
More articles of this series will be posted soon.

Immanuel Velikovsky has suggested that Jupiter was once a much closer neighbor than it is today. And this planetary behemoth was not a passive body, but was active to the point of being the progenitor of a number of terrestrial troubles. Once this thought is entertained, Velikovsky’s contention should become an obvious interpretation to any reader of ancient mythology.

Accounts of the exploits of the God of Thunder and Lightning are found in cultures worldwide. Appellations for the god vary, but their contexts offer a common testimony. The less fanciful accounts make clear the fact that the planet Jupiter was the Thunder God. He is frequently described as hurling his bolts to the earth:

Lo, through the clouds the father of the gods scatters red lightnings, then clears the sky after the torrent rain: never before or since did hurtling fires fall thicker
. . . terror filled the hearts of common folk . . . It is possible to expiate the thunderbolt, and the wrath of angry Jove can be averted. . . . The sun had already lifted his full orb above the horizon, and a loud crash rang out from heaven’s vault.  Thrice did the god thunder from a cloudless sky, thrice did he hurl his bolts.

Myth, legend and ancient history all attest that this same Jupiter once dominated our heavens as a brilliant celestial light. Hebrew legend is very specific in regard to Jupiter’s former proximity and brilliance, and it also suggests a chronological context. “Abraham’s [military] victory was possible only because the celestial powers espoused his side,” Louis Ginzberg writes. “The planet Jupiter made the night bright for him and an angel, Lailah [Hebrew: night] by name, fought for him.”

Velikovsky asserted that in the era of Jupiter’s prominence in our skies, Earth witnessed the Thunder God’s propagation of Venus—the ejection of primal planetary matter by a giant of the solar system—Venus being thrust into an orbit intersecting that of Earth. He further claimed that the Greeks came to see this event as the birth of Athene from the head of Zeus.

Whatever the past interrelationships of Jupiter and Venus, these planetary deities constituted a menacing presence in the vault above, ultimately making the Cities of the Plain victims of an unearthly disaster. 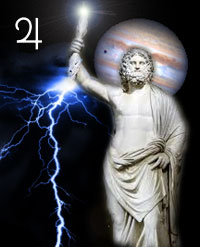 According to Velikovsky, “The planet-god Jupiter . . . was pictured with a thunderbolt because of the spectacles witnessed by the inhabitants of the earth—like a discharge that was directed toward Venus when it approached its parental body.” Moreover, “the phenomenon of brimstone (sulphur) falling from the sky . . . in the course of great discharges, as narrated in ancient sources (Old Testament and Homer among them), resulted from smashing two oxygen atoms into one atom of sulphur,”sulfur being a notable constituent of the atmospheres of both Jupiter and Venus.

Sodom and Gomorrah apparently were target zero for one such discharge. The lovely plain was burned, gouged, and jolted—never to be the same again—as the cities and their inhabitants were incinerated in an electrical torrent and carried into their common grave. 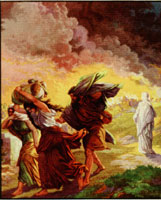 Lot’s wife was possibly a victim of the radiation emitted by the stupendous arc, “crystallized” (for lack of a better term at the present) as she watched the annihilation unshielded. The destruction was so widespread and so complete that Lot’s daughters thought themselves and their father to be the last people left alive upon the earth (Genesis 19:31-38).

Jupiter’s ragings were feared elsewhere in the Middle East as well:
“. . . Enlil, [Sumerian] god of the air . . . stood for force . . . the thunder and lightning over the Mesopotamian plain was Enlil, and also . . . it was Enlil . . . who destroyed a city.” The author reporting this incident confessed that he was unable to fathom the “true meaning” of the record.

Although the era is uncertain, we find a striking parallel to the biblical record in an account from South America:

“At Pucara, which is forty leagues from Cuzco on the Collao road, fire came down from heaven and burnt a great part of them while those who tried to escape were turned into stone.”—obviously the same fate as that of Lot’s wife.

I suspect that other records of natural electrical destruction in this period of Earth’s history are awaiting recognition or discovery.

Earth history and topography thus bear more than one type of celestial imprint. What additional strange phenomena remain hidden from our knowledge because of our preconceptions and philosophies?

Above excerpt from MAN AND HIS PLANET – An Unauthorized History by James E. Strickling, Eloquent Books ISBN: 978-1-60693-099-1. Go to www.jimstrickling.com.

* But the present extent and depth of the lake possibly resulted from a later catastrophe.