Statistics seem to indicate that #1 cause of death in U.S. is Treatment…

Drugs and Doctors May be the Leading Cause of Death in U.S.

(part of an article by Joseph Mercola, D.O.)

The original study was published by Dr. Starfield, a full professor of public health at the most prestigious hospital in the United States, Johns Hopkins. Her study never had the headline in it, but instead listed the published research documenting the various causes of deaths that doctors contributed to.  I simply added them all up and compared them to cardiovascular diseases and cancer and came up with the above headline, which was widely circulated on the Internet.

Interestingly, when I contacted Dr. Starfield by e-mail she disagreed with the headline I had come up with. She did not feel that doctors were the third leading cause of death, but thought they were the number one cause of death because of their failure to inform their patients about the truth of health. Now this might be a bit too harsh as even if people understand health truth they have freedom of choice and can choose to use sugar, soda and drugs (legal and illegal) to compromise their health and longevity.
However, JAMA actually published a study a year earlier that could support that doctors may be the leading cause of death in the United States.
Read More >>

Why doctors are more dangerous than guns

This investigation by Mike Adams, the Health Ranger, reveals why you are 6200% more likely to be killed by your doctor than by a homicidal shooter. This is based on U.S. government statistics from the Centers for Disease Control, combined with doctor-caused deaths published in the Journal of the American Medical Association.
These data show that FDA-approved prescription drugs kill 290 Americans every single day, meaning that for mass shootings to approach that number, you’d have to see a Colorado Batman movie massacre take place EVERY HOUR of every day, 365 days a year.

The latest data on the leading causes of deathin the United States has been released by the U.S. Centers for Disease Control and Prevention (CDC).

The report, which is based on 2010 data, lists the 10 leading causes of death as follows:

In an analysis, 24/7 Wall St. determined that the costs to the economy for these top 10 causes, including not only direct medical care but also the indirect loss of productivity, amounts to a whopping $1.1 trillion!
However, there is one leading cause of death that was left off of this list, and when that is factored in the costs to the economy, and the death toll itself, is actually even higher. 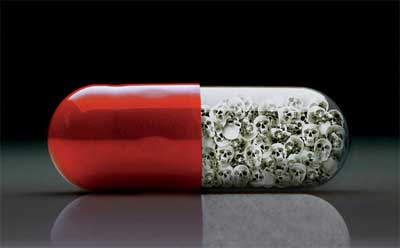 Over a decade ago, Professor Bruce Pomerance of the University of Toronto concluded that properly prescribed and correctly taken pharmaceutical drugs were the fourth leading cause of death in the U.S. More recently, an article authored in two parts by Gary Null, PhD, Carolyn Dean, MD, ND, Martin Feldman, MD, Debora Rasio, MD, and Dorothy Smith, PhD, describes in excruciating detail how the modern conventional American medical system has bumbled its way into becoming the leading cause of death and injury in the United States.