“These great ages are not presented in the Bible as if they are in any way extraordinary for their times, let alone miraculous.” — Carl Wieland “Creation Ex Nihilo”

The fifth chapter of Genesis is the genealogy of Adam and Eve. It gives us the ages of some of Adam’s children (and their children’s children). Many times in the Old Testament we see the life span of humans reaching great ages. Many as old as 900 years.

The Bible tells us that:

Many people wonder how, or if this is possible.

Biochemist Cynthia Kenyon has found a simple genetic mutation that can double the lifespan of a simple worm, C. elegans. The lessons from that discovery, and others, are pointing to how we might one day significantly extend youthful human life. When it comes to aging well, having “good genes” (or rather, mutant ones) is key, says Cynthia Kenyon. She unlocked the genetic secret of longevity in roundworms — and now she’s working to do the same for humans.  [ Source/Read More >> ]

Scientists Get Closer to Understanding Why We Age

Time waits for no man, the old truism goes, but in recent years scientists have shown that it does seem to move more slowly for some. Molecular biologists have observed that people’s cells often age at different rates, leading them to make a distinction between chronological and biological age. 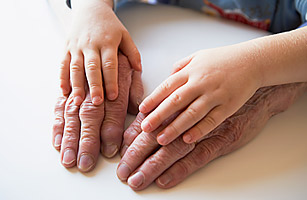 But the reason for the difference remains only vaguely understood. Environmental factors such as smoking, stress and regular exercise all seem to influence the rate at which our cells age. Now, for the first time, researchers have found a genetic link to cellular aging — a finding that suggests new treatments for a variety of age-related diseases and cancers. (See TIME’s Health Checkup “How to Live 100 Years.”)

The field of biological aging has in recent years focused on the long molecules of DNA contained in human cells called chromosomes. All chromosomes have protective caps at either end called telomeres. Each time a cell replicates itself (as it does before it dies), the telomeres shorten, like plastic tips fraying on the end of shoelaces. Shortened telomeres have been linked to a host of age-related illnesses such as heart disease and certain cancers. (Scientists have yet to study whether telomeres influence a person’s appearance.) Last year’s Nobel Prize for Medicine was awarded to three American scientists for their work in the field, and many scientists now believe that telomeres are the closest we may come to identifying a biological clock — and our best bet for learning how to stop or turn back that clock. (See portraits of centenarians.)

To better understand the aging discrepancy, a team of researchers in Britain and the Netherlands scanned more than 500,000 genetic variations across the human genome. Using a population of nearly 12,000, they then attempted to pinpoint a genetic link to telomere length. (See how to prevent illness at any age.)

In a significant breakthrough, the team successfully identified that a particular gene sequence was associated with differences in telomere length between individuals. What’s more, the sequence was clustered near a gene called TERC, which is already known to play a role in the production of an enzyme called telomerase. Telomerase repairs telomeres when they shorten. “That was very exciting for us,” says Nilesh Samani, a cardiologist at the University of Leicester who co-led the research, which was published last week in Nature Genetics. “It gave us great confidence that we identified genetic variants on a pathway we already know is associated with telomere length.”

Welcome to GenAge, a manually curated database of genes related to ageing. GenAge is divided into genes related to longevity and/or ageing in model organisms and ageing-related human genes. The section on human ageing-related genes includes the few genes directly related to ageing in humans and the best candidate genes obtained from model organisms. Human genes are thus considerably better annotated and may serve as a starting point for future studies, including genetic association studies, or even for exploiting clinical interventions in human ageing.

The schema of GenAge is available online as well as GenAge’s statistics. Release notes for the current build are also available.

GenAge is employed by many researchers and has been cited in several publications. It was highlighted in Science (307:187), Nature Reviews Genetics (5:1362), and BioTechniques (39:21).

Here are original quotes from the Bible related to age of early humans created by God(s):