Unlocking The Great Pyramid Of Cheops

Many archeologists have struggled for years trying to figure out how the great pyramid of Cheops (AKA Khufu) was built, many theories came out but most of them did not cover several facts, and had several question marks around them.

Back in 2007 the genius French architect Jean-Pierre Houdin revealed his theory about how the pyramid was built to the whole world.
For the first time, it becomes very possible that Hemiunu the architect of the great pyramid used an external ramp along with a spiral internal ramp to get the pyramid built. Not only Jean-Pierre Houdin offered the most possible solution to the mystery; but also, he is very close to revealing the hidden chambers inside the great pyramid of Cheops that are not discovered yet.
Once the Egyptian officials give permission to Mr.Houdin to survey the pyramid of Cheops, the whole world may know a lot more about this massive structure.
In this detailed post we will provide the interesting facts that were uncovered by Houdin’s theory, as well as the opinions of some of the very reputed Egyptologists.

If it is true that the ancient Egyptians used an external ramp to get the great pyramid of Cheops built as many theories suggest, this ramp would have extended for several kilometers, which does not make sense.

According to Jean-Pierre Houdin, an external ramp that only went 43 meters high at a 7% slope was used at first to build the lower part of the pyramid and transfer the 60 ton granite beams required for the relief chambers above burial chamber, in addition to this; a second spiral ramp with corner rooms below its edges to help rotate the sledges was built inside the pyramid. This system offered a solution to the major mysteries of the pyramid, which are its height, and its unique main burial chamber. 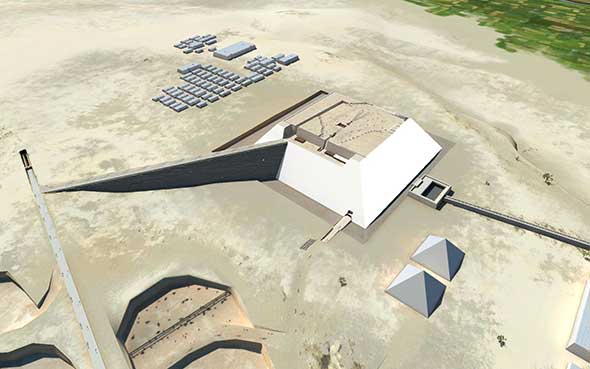 To achieve a perfect geometry, and accurate alignment, the outer casing stones were put in place first, and then the pyramid of Cheops was filled with rough limestone blocks of different shapes and sizes that only acted as filler. Surprisingly, when Jean-Pierre examined the great pyramid with the help of the well-known Egyptologist Bob Brier, he found solid evidence that his theory about the internal spiral ramp is true. When the great pyramid of Cheops was examined from the outside, Jean-Pierre noticed light shades on the outer surface that completely align with his spiral ramp (check the photo below). 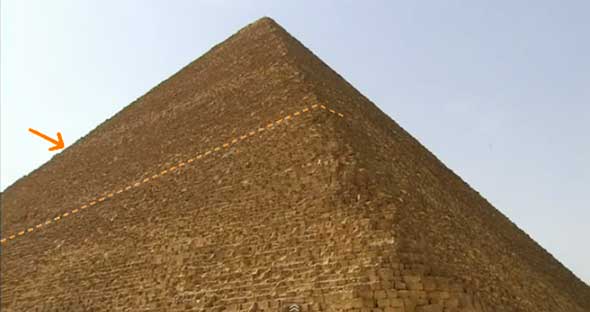 Near the top of the pyramid Jean-Pierre also noticed a small notch that goes in alignment with his calculations of the spiral ramp, and was curious to find out what is behind it.  Houdin’s companion Egyptologist Bob Brier was permitted to climb the pyramid and examine the notch, and right behind it, he discovered a wide empty room that was not mentioned in any Egyptology resources – which may be another proof that the spiral ramp exists, according to Jean-Pierre, access to the spiral ramp may very well be behind the stone blocks this empty room. 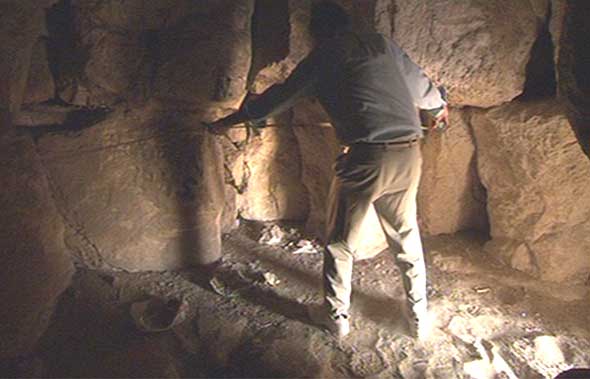 A French team of scientists surveyed the pyramid of Cheops back in 1980 using a technology called microgravimetrics that lets you know where low gravity areas are, in other words, empty spaces. The French team was hoping to find secret chambers inside the pyramid – although they did not find any, their thermal images show something very interesting, the empty spaces within the great pyramid exactly match Houdin’s calculations of the internal ramp as shown in the picture below (the green color represents the low density areas). 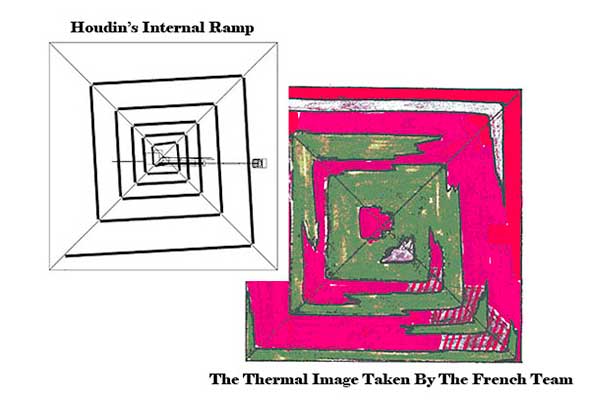 For a long time, no one really knew the purpose of the grand gallery, and some thought that it was just a passage, but Jean-Pierre again offered something different, and yet very interesting – based on his theory, the grand gallery was nothing but a tool to transfer the giant granite beams that were used to build the relief chambers located above Khufu’s burial chamber, and to build the flat ceiling of the burial chamber itself. The theory suggests that the grand gallery was used as a counter weight system where a wooden trolley equipped with heavy stones slid down on wooden rollers that moved on the stone benches running along the sides all the way through the grand gallery to help raise the granite beams on the opposite side through the external ramp to their respective positions. Using this counter weight system allows less than two hundred men to easily move the 60 ton granite beams to the upper part of the pyramid. 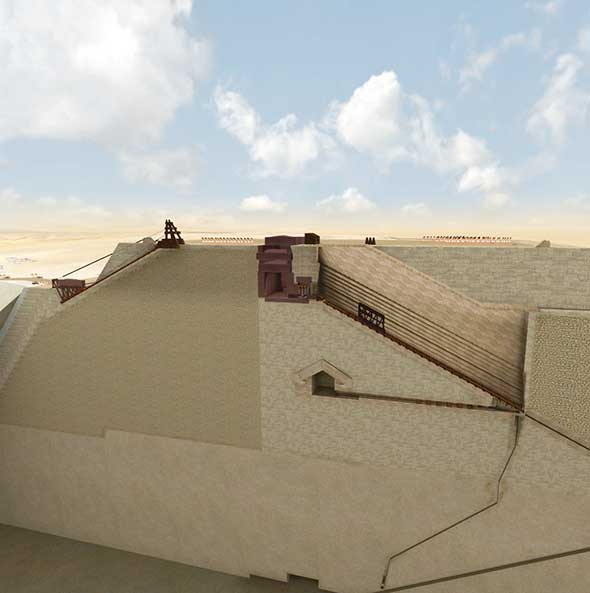 First, the wooden slides that held the beams were attached to the wooden trolley using a rope system – Then; the regularly spaced rectangular holes found in the lateral stone benches were used to fix wooden beams that kept the rollers of the wooden train that held the trolley inline as they slid on the lubricated benches.  In fact, upon a closer look, traces of scratches on the vertical face of the stone benches can be seen all along the grand gallery, and those traces are a solid proof that something was moving within the gallery and pushing against the vertical face of the lower stone benches. Another interesting fact is the existence of chisel marks in the higher walls of the grand gallery on both sides, according to Jean-Pierre, a set of wooden beams were fixed where the marks can be seen, to guide the upper part of the trolley as it slid through the grand gallery. 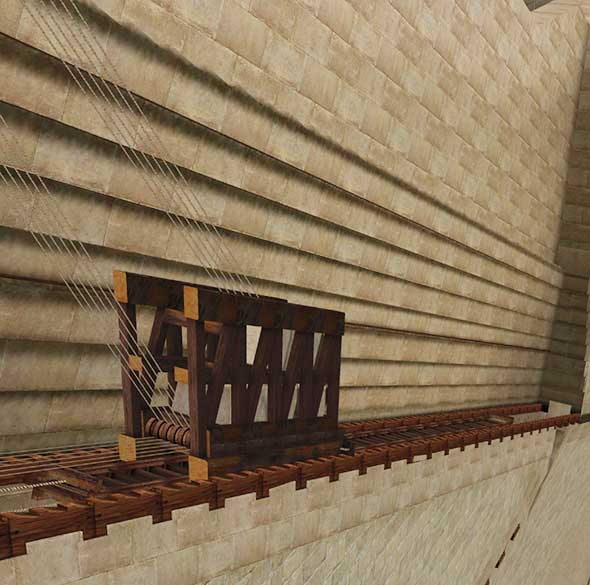 To further proof his theory, Jean-Pierre Houdin has worked with a group of specialists from Dassault Systemes, the 3D software world leader, and his partner in the Khufu project. They applied his theory to a 3D virtual reality simulation. For two years they worked on modeling the pyramid of Cheops, and how it was built using their own 3D scientific tools. Amazingly, when the theory was put to the test using 3D simulation, everything worked correctly, and even the position of the room that was investigated by Bob Brier exactly matched the coordinates of the internal ramp. 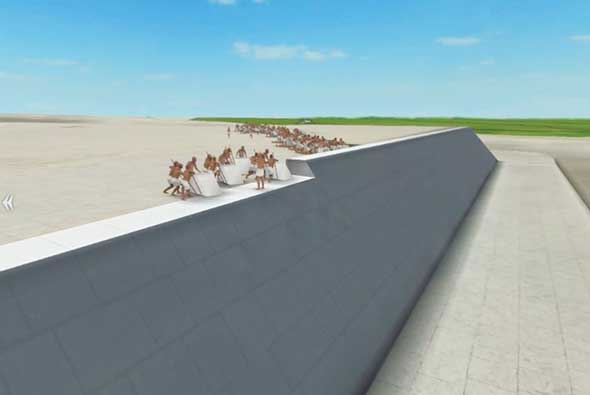 Based on Jean-Pierre’s theory, the current entrance in the eastern corner of the northern wall of the chamber that visitors use today was not the same entrance used to transfer the sarcophagus, and the funeral burials to the burial chamber, instead, an entrance that is located at the western side of the same wall was used. This fact is highly likely to be true for the reasons below: 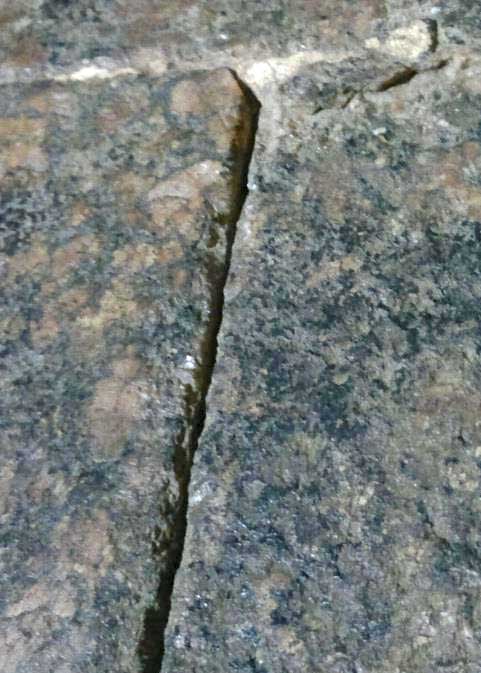 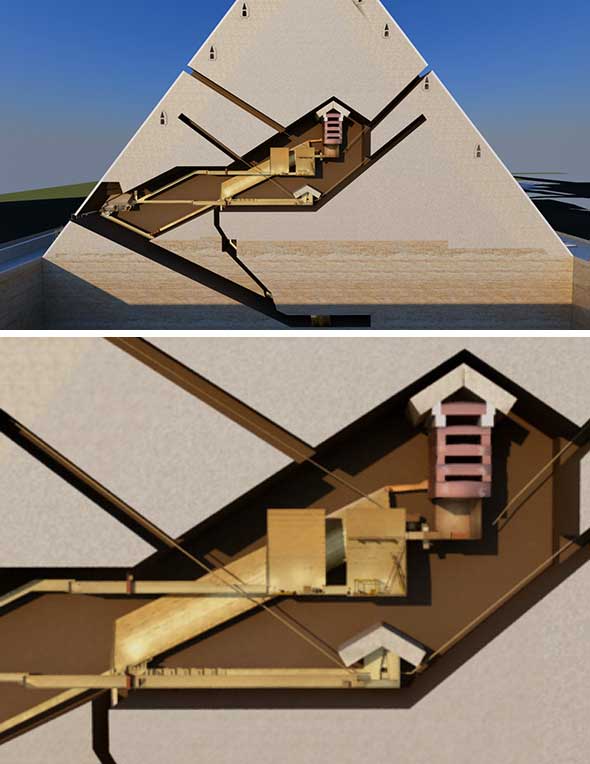 A Call For Action

To solve the mystery, all that Jean-Pierre Houdin requires is a permission from the Egyptian officials to survey the pyramid of Cheops.

Pyramids-of-egypt.com are calling out for the minister of antiquities Mr.Mohamed Ibrahim to take this seriously, and offer the required help, and assistance to Mr.Houdin to proof his theory. This will not only benefit Egypt, it will actually benefit the whole world. Knowing that Dr.Zahi Hawass rejected Houdin’s offers to have a joint expedition of Egyptian antiquities experts and French engineers, using infrared, radar and other non-invasive ways to check out the hypothesis, we will do everything in our power to locally push the authorities to consider Houdin’s work for it adds a lot to the history of the great Egyptian pharaohs.

If you have a good graphics card, and high speed internet connection, you can experience the 3D simulation of Houdin’s theory on this website: “http://www.3ds.com/khufu”,

Featured Secrets Of The Pyramids