The two basic metaphors for the creation of reality are:

The “waves on the ocean” metaphor says that there is an underlying energy, call this Source Energy. This source energy is consciously aware and intelligent so let’s call it Source Consciousness. With its pure energy, this source consciousness can create anything it wants by manipulating its pure energy to create waves, or particles, of condensed and filtered light, because essentially that’s what matter is–frozen light. So all matter and things we experience would be like waves resting upon this underlying ocean of pure unfiltered light. 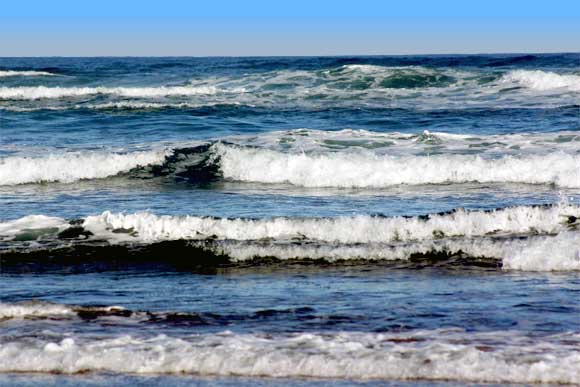 It’s sort of like this underlying source consciousness is orchestrating this symphony of the universe, creating, sustaining, and directing every particle and atom. So, the atoms and particles themselves are just waves, or peaks of energy, on the underlying field of pure conscious energy. This corresponds to the fact that scientists have found a “zero-point field” which represents the lowest possible energy state. So, in a vacuum of space, this field is always there randomly fluctuating, but with an average fluctuation of zero. On the other hand, physical particles are areas of space where there is a level of fluctuation above zero for a sufficiently long period of time (Falk, 74). In essence, the physical particles that we observe are waves, or peaks of energy, stemming from an underlying field of infinite energy known as the “zero-point field” in modern day science.

The other metaphor is the movie projector theory of reality.

This metaphor, again, starts with an underlying field of light. And of course this Light is intelligent and consciously aware. This underlying pure light acts like the white light of a movie projector. A movie projector essentially filters the pure white light of the projector to produce the specific pattern of shapes and colors you see on the screen. Furthermore, it projects each frame together in succession so fast that it appears as a moving picture to your mind. So, the same thing is happening in reality, but on a larger scale and in 3 dimensions. So, if you throw a ball and it looks like that ball is moving, what is really happening is that ball is being recreated every split second in a different position so that it only appears to be moving through space. 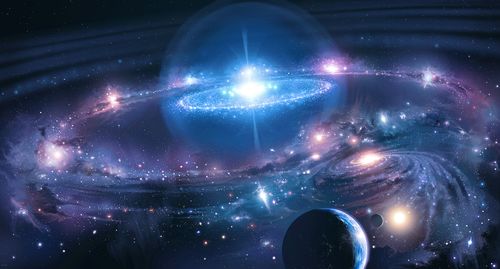 This view of reality has an appeal due to certain quantum phenomena. Take for instance when an electron loses energy and steps down to a lower energy state. Quantum physics experiments suggest that the electron doesn’t move from point A to point B by moving through space, but instead goes from point A directly to point B instantaneously without any movement in between. More or less, it seems like the electron is instantly teleporting from one point to another. But if reality is being projected, or recreated, every fraction of a second, then all we’re noticing are successive frames of the projection.

The two theories essentially boil down to the same basic concept:  There is an underlying intelligence of pure light or energy responsible for the creation of reality and the laws, or predictable patterns, of nature. This intelligence creates reality from its own body of light, and this can be thought of as like a projector projecting a movie, or as waves on an ocean. However, understand that this Source is projecting the information of the world, not the specific way you see it. You are the projector of what you see. You take the information about the physical world provided by the Source and convert that into a picture of the world. A table, for instance, is comprised of a specific pattern of physical energy. That energetic pattern is supplied by the Source. You are the one that takes that information and projects the visual image of a table.

Source: Falk, Geoffrey D., The Science of the Soul: On Consciousness and the Structure of Reality.  Nevada City: Blue Dolphin Publishing, 2004.

Introduction | Evolution and Consciousness | Life After Death: The Verdict Is In |
A New Way of Envisioning Consciousness and the Brain | What Happens When We Die?
The Body is a Shell | Everyone has a purpose they must fulfill before death |
Life is about Spiritual Growth | The Problem of Evil | We exist in a multi-dimensional universe |  Conclusion | Notes