The populations displayed on the clock are not intended to imply that the population of the world is known to the last person. Rather, the clock is the Census Bureau’s estimate of the world population size and an indication of how fast it is growing.  The world population estimates and projections used to produce these figures were developed by the International Programs Center based on analysis of available data on population, fertility, mortality, and migration. The analysis was performed separately for the countries or areas of the world with a population of 5,000 or more. Population estimates and projections analyses are based on census, survey, and administrative information. For most countries, and especially less developed countries, adjustment of the data is necessary to correct for errors, omissions, and inconsistencies in the data. Since the most recent data for each country are often at least 2 years old (and for most countries they are older), the population figures used for the clock are projections from those estimates based on assumed trends in fertility, mortality, and migration. As new data become available, all data are reevaluated and past conclusions may change.     Note: Source of the image above

(Figures may not add to totals due to rounding) Source: http://www.census.gov/cgi-bin/ipc/pcwe 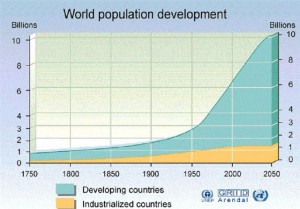 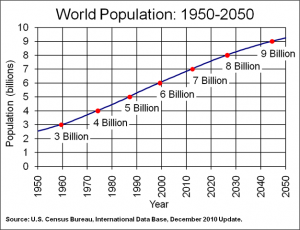 The 10 Largest Countries and Areas Ranked by Population: 2010

The Largest Countries and Areas Ranked by Population: 2050

The current period of rapid population growth will continue for at least another 50 years, according to the 2000 World Population Data Sheet of the Population Reference Bureau. By 2050, the world is expected to add 3 billion more people to reach a total of 9 billion.

Projections of global population by country and region can be made with some assurance as far as 2050, because the parents of many of the children who will be alive then are already growing up. We know that 99 percent of future population growth will be in the developing world, and that 90 percent of that growth will be in the poorest countries and regions. We also know that the populations of Europe, Russia, and Japan will decline by a measurable amount.

The population growth projection for year 2050 predicts that India will become the most populated country in the world.

Largest Cities on the Planet

Overpopulation is a condition where an organism’s numbers exceed the carrying capacity of its habitat. The term often refers to the relationship between the human population and its environment, the Earth. The world’s population has significantly increased in the last 50 years, mainly due to medical advancements and substantial increases in agricultural productivity. The recent rapid increase in human population over the past two centuries has raised concerns that humans are beginning to overpopulate the Earth, and that the planet may not be able to sustain present or larger numbers of inhabitants.  [ Source: http://en.wikipedia.org/wiki/Overpopulation ] 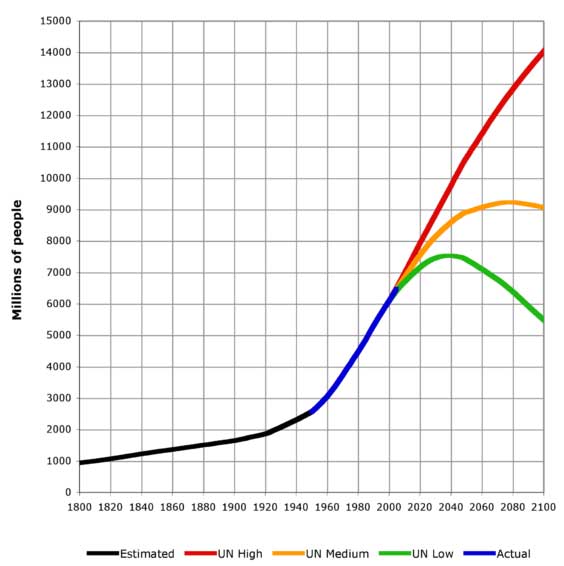 World population from 1800 to 2100, based on UN 2004 projections (red, orange, green) and US Census Bureau historical estimates (black).

Historically the world population grew only very slowly from about 2.5 million at the beginnings of urbanization to some 50 million around the time of the black plague of the middle ages. It is only with the industrial, scientific and medical revolution and the colonial expansion of Western powers, that the world population has climbed to the dizzy heights. During the 20th century, the world’s population increased almost fourfold, from 1.6 to 6 billion. Until very recently there were fears that in the next century, world population would explode to some 12 billion people, leaving little room for wilderness areas to preserve wildlife and putting extreme pressure on food production, water and non-renewable resources. 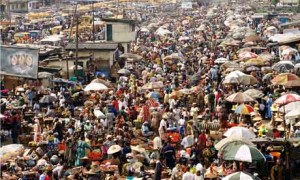 At a time when there has been a manifest need to curtail runaway population growth, the leaders of the world’s great patriarchal religions have, almost without exception been ordering their populations to continue to multiply making frontal attacks on any effective form of contraception and family planning. The Catholic church has waged war not only on abortion but cursed any effective form of contraception as simple and protective of disease as the condom. Islamic leaders have also roundly opposed family planning. The leaders of both the Christian and Islamic world share an agenda of male reproductive right and a calculated determination to multiply the faithful by advocating unrestrained fertility even in the face of the manifest damage such policies have caused. Desmond Morris makes no bones about it:

“If we are honest there is only one root cause of the disaster facing the planet, and that is the appalling rate at which our human species has increased its population in recent centuries. … Who is to blame for the crisis we face? First and foremost, I accuse the religious leaders of the world. They have fed mankind with the dangerous myth that humanity is somehow above nature and that it is our god-given right to hold dominion over the Earth and subdue it. In many cases, they have actively encouraged over-population and have gone out of their way to prevent family-planning schemes. They are a disgrace. Secondly, I accuse political leaders, almost all of whom follow a policy of national growth, regardless of the consequences. … But we are not designed as a high-quantity species. We are a high-quality species, and all our social thinking should be directed to this thought” (Porritt R550).

The attitude of world leaders has also been irresponsible and self-serving. While leaders of major western powers push for ever greater gross national products, honing their economies as if there was never an end to increasing production, 9/10ths of the world population sinks further into poverty, losing educational, resourcing and livelihood opportunities.

Fortunately 2002 figures showed a drop in fertility. Current trends suggest a population in 2050 around 9.2-9.3 billion (UN, Population Research Bureau BBC 18 Aug 2004). To everyone’s surprise in 2002 a very significant drop was detected in the fertility rates of a broad spread of diverse countries spanning the developed and developing world comprising half the world’s population and with little in common between their governments and social attitudes. In 1950, worldwide the average woman had five children. Today she has just 2.3. Although in many countries there are still a large number of people at or below child-bearing age and actual birth rates will remain very high for some years to come, this fall has already led to a downgrading of future population predictions and fears of a population crash with societies full of the elderly unable to support their own services. However 2004 predicitions have incresed again from around 8.9 to 9.2 billion.   [  Source: http://www.dhushara.com/book/diversit/bomb.htm ]