Although Sigmund Freud was not the sole discoverer of the unconscious mind, he is given a majority of the credit for bringing this theory into the mainstream. Freud believed that there were underlying levels of the mind beneath the conscious one, and it is these hidden levels that dictate much of the behavior of an individual, especially the abnormal behavior:  Freud’s main area of interest. Along with the theory of the unconscious mind, dream analysis, emotional catharsis, free association and the stages of sexual development, Freud founded the psychological school of psychoanalysis. However, I don’t like Freud, or his stupid beard and round spectacles. He has caused me years of anguish in undergraduate psychology courses, and therefore, that is the last honorable mention he gets!

Have you ever lost something, like your car keys, and despite tirelessly searching for them, you cannot find them, and then around five minutes later while straining your brain to remember where you left them, it finally comes to you? This sudden retrieval of memory that is not readily available is called the Incubation Effect. The Incubation Effect is a perfect demonstration of the power of your subconscious mind. I’m sure you’ve heard that our brain stores everything we experience in memory; however, this is highly suspect. The brain stores information that is meaningful to us.

For all intents and purposes, “meaningful” is defined as “reminiscent of previously experienced memory or knowledge”. If you are a huge fan of telepathy, as I am, you’d have an easy time remembering who Wolf Messing is since telepathy is important to me, and thus Wolf Messing is reminiscent of telepathy. However, where I leave my car keys does not hold much of significance, but just enough for my brain to record their last known location. Now, here’s the tricky part: the greater meaning a memory has, the easier it is to retrieve. In both the Wolf Messing and car key example, the subconscious works to find and then display the memory, but one memory has more meaning and therefore is more easily recalled.

One key concept becomes clear here: the subconscious mind can act independently by regulating the body, but it can also act in conjunction with the conscious mind. The keyword here is “retrieval”. The subconscious mind retrieves information for the conscious mind. Now it seems that the easiest way to perform a psionic ability would be to simply talk to your unconscious mind. “Yah, right, that’d be way too easy”, our mind/brain is geared toward memory production and retrieval, barring any brain underdevelopment. What our mind/brain is not geared toward is anomalous memory retrieval (I will be using the term anomalous memory to indicate information received via psionics). This may be a good explanation for analytical overlay when starting to learn remote viewing or telepathy. You ask yourself, or more appropriately your unconscious mind, “what does this location look like” or “what image is this person sending me”. Since your unconscious mind has not encountered a request like this before, it may search for logical conclusions from your actual memory. It seems though that your mind adapts, as it should with ample practice, and soon enough accurate bits of information seep through. 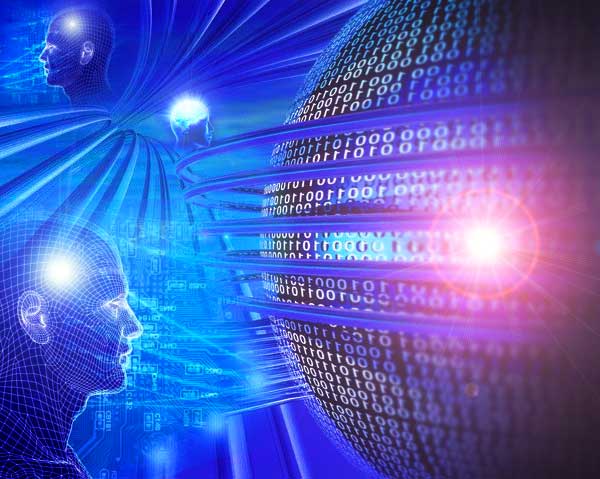 The Unconscious Mind and Input of Anomalous Memory

Here’s where it starts to get a bit hazy. How this information is actually received is subject to much scrutinizing, and hence various theories have been put forth, none of which are definitive. At this present moment in time, this author is less concerned with how it works, and more concerned with that it works . Perhaps with further reading and discovery, I can submit a general theory in a revision of this article.

I basically subscribe to the idea that in some manner, and at some level, there is interconnectivity between minds. Some think it’s an ether-like medium through which thoughts can be transferred, or perhaps even a sort of “matrix” that can be tapped into. One theory holds my particular interest, however, though I am skeptical about it.

If you assume that there is a bio-electric field that surrounds the body (this is something other than an artificially created shield construct), then this field is controlled by….yup, you guessed it: the unconscious mind. This field would obviously have an output function, in that the inner state of the human body is reflected in the field (energy workers base their practice on this assumption, e.g., a lack of strength in one area of the field can indicate weakness or disease). Perhaps this energy field can act as a two way street. Consider this flow chart:

Conclusions suck. If you absolutely need a recap of what you just read, then you should read it again. Remember: Freud, physiology, incubation effect, retrieval, and bio-field.

Psionics is defined the study and practice of using the mind to cause psychic phenomena, covering such things as Telepathy, Precognition, Telepathy, Clairvoyance and various other different psychic abilities, and is partly based on research done on psi, by parapsychology. The methods of practice within Psionics act as a useful framework to help an individual learn how to take advantage of these skills and abilities. Some of the practical applications of Psionics can vary greatly, such as using remote vision to work out where you lost an object, using mind-body interactions to help you heal from an illness at an increased rate(you should never use this in place of a licensed medical practitioner), or using precognition to help determine the outcome of an event.

Most of the research done into Psychic phenomena has been studied under the field of Parapsychology, and has used terms such as psi to describe the psychic phenomena. Within Psionics, psi is often viewed as a type of metaphysical energy that can be manipulated with the mind. Whilst ‘psi energy’ can be useful for conceptualizing and putting concepts into practice, the actual mechanic behind how it works is currently unknown, and the term used within Parapsychology does not make any assumptions about the nature of psi, and only discusses what can be observed, which is the ability to influence the environment, or gain information from the environment.

Psi can be classified into distinct types of observable phenomena, Psychokinesis (Mind-Over-Matter) and Extra Sensory Perception. Another class of psychic phenomena, which involves mind-body interactions, and has been termed as DMILS (Direct Mental Interactions with Living Systems) within the scientific community, covers various aspects of using the mind to influence living matter and can cover aspects, such as psychic healing. Constructs act as a useful tool for allowing a person to conceptualize their goal, and most often, whilst not directly observable, can help with a variety of things including PK, ESP and Mind-Body interactions.

Such examples of Psychokinesis can range from manipulating Random Number Generators (Commonly used in experiments, as the results are easily measurable), sliding or rolling objects across a table, and in some other cases, involves manipulating the environment of an object to reach a goal. Some studies have even shown that PK is seemingly able to manipulate the past in an effort to reach your goal!

Extra Sensory Perception involves a person or subject, gaining information through seemingly impossible means. Such abilities in involve Telepathy (The ability to read minds), Remote Viewing (The ability to sense remote locations), retro/post-cognition (Seeing the past), precognition (Seeing the future). It also covers abilities such as Aura reading, Empathy and anything else that involves perceiving information.

Psionics also covers Constructs, which can be thought of as thought-forms (an idea or concept, used to direct your intenion), and commonly perceived as energy, which is normally created with the intention of focusing on a specific goal, and can be ‘programmed’ for specific purposes, examples of constructs includes a psi-ball, which is a ball, which one can ‘program’ or put their intentions into.

There are many things that one should be wary of when practicing Psionics. Psychic overloads are an example, and tend to come with several different symptoms. Psychic overloads can be caused by many different things, ranging from bringing in too much information via ESP, or pushing yourself for too much with PK. Symptoms of a psychic overload can include mild headaches, feeling and acting differently than you normally would, and in some cases, being a lot more tired than you normally would be, and feeling mentally exhausted. These however may be being caused by other things, and if they persist, please see a doctor as these symptoms may be signs of a serious illness.  Furthermore, Psionics has the potential to promote dissociative thought, so you should not practice Psionics if you have ever suffered from a mental illness such as schizophrenia or dissasociative disorder, as Psionics has the possibility of exacerbating symptoms related to those illnesses.  You should also be at least 18 to practice Psionics, and realize that by doing so, it is being done at your own risk.

Psi, used as a scientific term, within Parapsychology, describes different forms of psychic phenomena, such as Psychokinesis (PK, mind over matter) and ESP (extra-sensory perception), without explicitly relating to the underlying mechanics.  Current psi theories tend to describe information moving from one place to another (These psychic or psi theories are out of the scope of this brief introduction).  The term Psionics, at least the term used commonly by the online energy communities(OEC), such as this website, tends to refer to a type of energy that can be manipulated with the mind, in order to achieve various different results.  Psi viewed in this context, is perceived as energy, and also seems to cover some of the psychological aspects of psi within its framework.

Whilst Psionics and its methods of practice are very useful for conceptualizing, and (hopefully!) learning psychic phenomena, it does not mean that this phenomena is actually “psychic” in nature, due to being unable to directly measure a specific “psionic energy” involved.  While psychokinesis(PK) and extra-sensory perception(ESP) can be viewed as working by a process of using “psionic energy”, the field of parapsychology tends to avoid labeling psi as such, and specifically only addresses what can be measured and observed though scientific study.