The Tower of Babel and The Confusion of Tongues

Note: The following article is part of series of articles/excerpts from “MAN AND HIS PLANET – An Unauthorized History” by James E. Strickling.
More articles of this series will be posted soon. 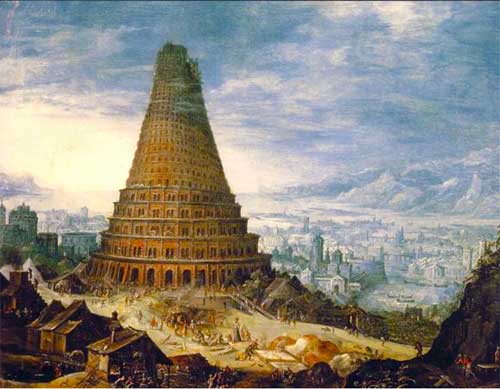 Believers view this account (e.g., their interpretation of it) as a true historical record. Skeptics generally agree to the popular notion that the story describes the sudden creation of new languages, but they regard such a claim as being pure fantasy.

As it turns out, the believers and skeptics are both wrong. And this begs the question, “Did something unusual actually occur as remembered in the account?” And if so, what was it?

There are, in fact, numerous records from around the world that attest to the reality of some kind of language-related disturbance in mankind’s ancient history. Moreover, these records are “geographically spotty enough” to suggest multiple near-simultaneous occurrences of whatever this was. So given this reality, what can be said of its nature?

An objective reading of the biblical account reveals only that the tower-builders’ speech was “confounded.” The passage in the eleventh chapter of Genesis reads in part:

Likewise, the oldest known extra-biblical record (the Assyro-Babylonian account) seems to agree with this:

Babylon corruptly to sin went
and small and great mingled on the mound.
The King of the holy mound. . . .
In his anger also the secret counsel he poured out to scatter (abroad) his face he set he gave a command to make strange their speech.
. . . their progress he impeded. . . .

The other records, transmitted orally for countless generations, are inconsistent. Some speak of “strange speech,” others of new languages.

Given the absence of a reference to new languages in what appear to be the most dependable records, those transcribed early on, another explanation is necessary.

The “arrest response” produced by [electrical] stimulation in the [brain’s] posterior frontal region . . . consists in the arrest of voluntary movement and may show additional features such as post-stimulation confusion, inappropriate or garbled speech . . .

Moreover, the elicitation of such effects is not restricted to direct electrical stimulation:

ELF [Extremely Low Frequency] electromagnetic fields and waves may be important biological stimuli because of their penetrability and long distance propagation . . . Their frequencies and intensities are within the ranges of processes generated by living organisms.

It is my opinion that this observed “inappropriate or garbled speech” is a contemporary example of what the Book of Genesis calls “confounded speech.” The Confusion of Tongues at the Tower of Babel can thus be demystified. It was a rather widespread natural disturbance that had nothing to do with the creation of new languages.

This of course begs the question, “What could have been the natural source of such provocative stimuli in the distant past?” Check out the reference below.

For a complete analysis with references leading to a reconstruction of the ancient event along with the likely cause, see MAN AND HIS PLANET – An Unauthorized History, by James E. Strickling, Eloquent Books, ISBN: 978-1-60693-099-1. Go to www.jimstrickling.com.