The Shroud of Turin is reputedly Christ’s burial cloth. It has been a religious relic since the Middle Ages. To believers it was divine proof the Christ was resurrected from the grave, to doubters it was evidence of human gullibility and one of the greatest hoaxes in the history of art. No one has been able to prove that it is the burial cloth of Jesus of Nazareth, but its haunting image of a man’s wounded body is proof enough for true believers. The shroud is wrapped in red silk and kept in a silver chest in the Chapel of the Holy Shroud in the Cathedral of St. John the Baptist in Turin, Italy since 1578. The shroud is unquestionably old. Its history is known from the year 1357, when it surfaced in the tiny village of Lirey, France. Until recent reports from San Antonio, most of the scientific world accepted the findings of carbon dating carried out in 1988.  The results said the shroud dated back to 1260-1390, and thus is much too new to be Jesus’ burial linen. 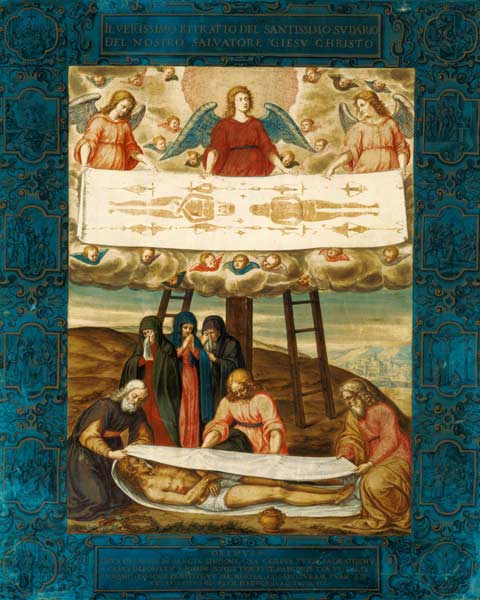 The section of the shroud showing the face reveals dramatic features
when viewed as negative image (click on the right image to enlarge). 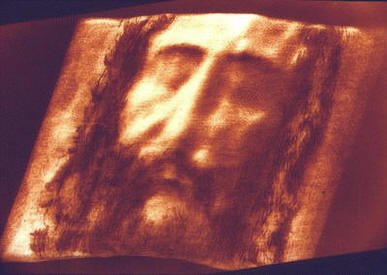 Three-dimensional relief of the Shroud face after smoothing of rough transitions
with a recursive filter.The computer showed us what the face of Jesus Christ probably
looked like before the Passion or after Resurrection, through an electronic cleaning
of the blood and wounds which provides the almost natural images of the face
Source: http://www.shroud.com/meacham2.htm 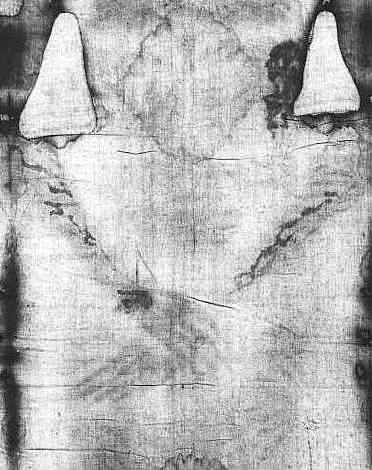 We can also see a large blood stain and elliptical wound on the person’s right side (remember, in a negative imprint left and right are reversed). From studying the size and shape of this wound and historical records, we can deduce that this wound could have been caused by a Roman Lancea. This lance is pictured in Slide 13.  In addition, by measuring the angle of dried blood on the wrist, one can reconstruct the angle at which this person hung from the cross. He mainly hung from a position 65 degrees from the horizontal.  But there is another angle of dried blood at 55 degrees. This shows that this person tried to lift himself up by 10 degrees. Why? Medical studies show that if a person just hangs from a position of 65 degrees in would start to suffocate very quickly. Only if he could lift himself up by about 10 degrees would he be able to breathe.  Thus he would have to raise himself up by this 10 degrees by pushing down on his feet which would have to have been fixed to the cross. He would then become exhausted and fall down again to the 65 degree position. Thus, he would continue to shift from these two agonizing positions throughout crucifixion.  That is why the executioners of crucifixion would break the legs of their victims to speed up death.
If they could not lift themselves up to breathe, they would suffocate very quickly.

One theory is simply that the Shroud is a painting . It has been proposed that it was painted using iron oxide in an animal protein binder. The STURP scientists have concluded from their studies that no paints, pigments, dyes or stains have been found to make up the visible image. Small amounts of iron oxide have been found on the Shroud but the iron oxide is evenly distributed all over the Shroud. If it were painted using iron oxide you would expect its concentration to be greater in the image areas verses the non-image areas. This is not the case but the iron oxide is evenly distributed all over the Shroud. Thus it is probably a containment caused by the presence of the Shroud in artists studios throughout history who were copying it. It is also possible that the copies may have been touched to the Shroud to transfer its sacredness and this contaminated the Shroud with iron oxide.

Also no painter has been able to reproduce all the different qualities and characteristics of the Shroud. That is, its negativity, 3D effect, no brush strokes or directionality, perfect anatomical details from blood stains, scourging, etc. and the image is a surface phenomena, that is the image only penetrates about 1/500 of an inch into the cloth. It was shown that the blood went on first and than image. Try doing that and then painting the body image. Thus up to now no one has been able to reproduce the Shroud in all its characteristics. Most scientists reject the painting theory.