Prometheus is a Titan, culture hero, and trickster figure who in Greek mythology is credited with the creation of man from clay and the theft of fire for human use, an act that enabled progress and civilization. He is known for his intelligence, and as a champion of mankind.

The punishment of Prometheus as a consequence of the theft is a major theme of his mythology, and is a popular subject of both ancient and modern art. Zeus, king of the Olympian gods, sentenced the Titan to eternal torment for his transgression. The immortal Prometheus was bound to a rock, where each day an eagle, the emblem of Zeus, was sent to feed on his liver, only to have it grow back to be eaten again the next day. In some stories, Prometheus is freed at last by the hero Heracles (Hercules). Among the ancient Greeks, Prometheus was venerated as a divinity. 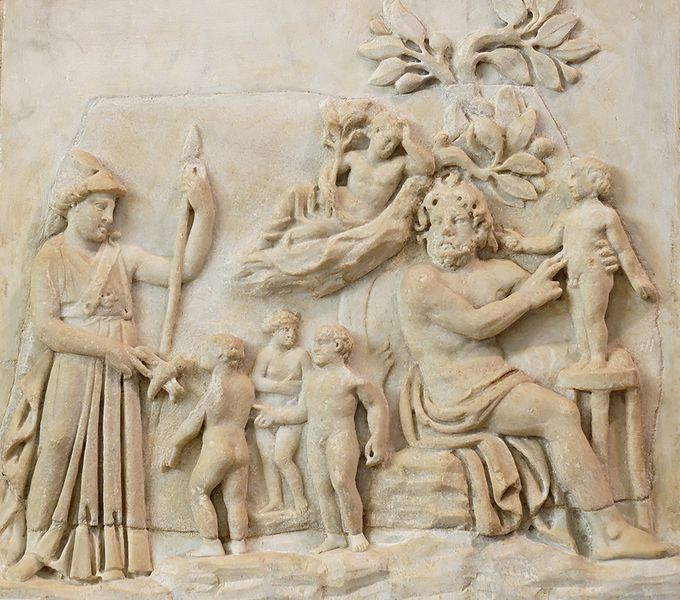 In the Western classical tradition, Prometheus became a figure who represented human striving, particularly the quest for scientific knowledge, and the risk of overreaching or unintended consequences. In particular, he was regarded in the Romantic era as embodying the lone genius whose efforts to improve human existence could also result in tragedy.

The Prometheus myth first appeared in the late 8th-century BC Greek epic poet Hesiod’s Theogony (lines 507–616). He was a son of the Titan Iapetus by Clymene, one of the Oceanids. He was brother to Menoetius, Atlas, and Epimetheus. In the Theogony, Hesiod introduces Prometheus as a lowly challenger to Zeus’s omniscience and omnipotence.

In the trick at Mecone, a sacrificial meal marking the “settling of accounts” between mortals and immortals, Prometheus played a trick against Zeus (545–557). He placed two sacrificial offerings before the Olympian: a selection of beef hidden inside an ox’s stomach (nourishment hidden inside a displeasing exterior), and the bull’s bones wrapped completely in “glistening fat” (something inedible hidden inside a pleasing exterior). Zeus chose the latter, setting a precedent for future sacrifices.

Henceforth, humans would keep that meat for themselves and burn the bones wrapped in fat as an offering to the gods. This angered Zeus, who hid fire from humans in retribution. In this version of the myth, the use of fire was already known to humans, but withdrawn by Zeus. Prometheus, however, stole back fire in a giant fennel-stalk and restored it to mankind. This further enraged Zeus, who sent Pandora, the first woman, to live with men.

Pandora was fashioned by Hephaestus out of clay and brought to life by the four winds, with all the goddesses of Olympus assembled to adorn her. “From her is the race of women and female kind,” Hesiod writes; “of her is the deadly race and tribe of women who live amongst mortal men to their great trouble, no helpmeets in hateful poverty, but only in wealth.”

Prometheus, in eternal punishment, is chained to a rock in the Caucasus, where his liver is eaten daily by an eagle, only to be regenerated by night, due to his immortality. Years later, the Greek hero Heracles (Hercules) slays the eagle and frees Prometheus from his chains.

Hesiod revisits the story of Prometheus in the Works and Days (lines 42–105). Here, the poet expands upon Zeus’s reaction to the theft of fire. Not only does Zeus withhold fire from men, but “the means of life,” as well (42). Had Prometheus not provoked Zeus’s wrath (44–47), “you would easily do work enough in a day to supply you for a full year even without working; soon would you put away your rudder over the smoke, and the fields worked by ox and sturdy mule would run to waste.” Hesiod also expands upon the Theogony’s story of the first woman, now explicitly called Pandora (“all gifts”). After Prometheus’ theft of fire, Zeus sent Pandora in retaliation. Despite Prometheus’ warning, Epimetheus accepted this “gift” from the gods. Pandora carried a jar with her, from which were released (91–92) “evils, harsh pain and troublesome diseases which give men death”. Pandora shut the lid of the jar too late to contain all the evil plights that escaped, but foresight remained in the jar, giving mankind hope.

Angelo Casanova, Professor of Greek Literature at the University of Florence, finds in Prometheus a reflection of an ancient, pre-Hesiodic trickster-figure, who served to account for the mixture of good and bad in human life, and whose fashioning of men from clay was an Eastern motif familiar in Enuma Elish; as an opponent of Zeus he was an analogue of the Titans, and like them was punished. As an advocate for humanity he gains semi-divine status at Athens, where the episode in Theogony in which he is liberated is interpreted by Casanova as a post-Hesiodic interpolation. 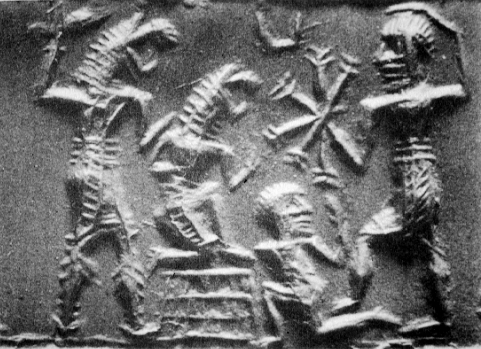 Attacking Demons,c.2000-1600 B.C. Isin-Larsa-Old Babylonian period.Hematite. Cylinder seal.Ischali, in the Diyala region, Mesopotamia.A kneeling figure with upraised arm is attacked by demonic creatures with leonine heads and bird feet, and by a male figure with multiple mace and scimitar.The exact nature of the demonic figures is difficult to determine, but the association of birdlike beings with the nether world is common in the Near East and the Aegean. The galla are described as those “who flutter over heaven and earth” in “Dumuzi’s Dream”, suggesting their birdlike nature. And as Henri Frankfort has shown, soul-birds in Egypt and harpies and sirens in the Aegean area all objectified certain aspects of terror inspired by death. The frightening, bird-clawed monsters with gaping mouths may represent similar underworld beings threatening the small cringing man with death.  Source >>