The Flower of Life

The flower of life holds a secret through which one can discover the most important and sacred pattern in the universe. This is the source of all that exists; it’s called the Fruit of Life. It contains 13 informational systems. Each one explains another aspect of reality. Thus these systems are able to give us access to everything ranging from the human body to the galaxies. In the first system, for example, it’s possible to create any molecular structure and any living cellular structure that exists in the universe. In short every living creature.

If you overlay a map (after getting the correct scale) with the complete flower of life, all sacred sites, standing stones etc, will sit at the centre of six points.

The Seed of Life

The “Seed of Life” is formed from seven circles being placed with sixfold symmetry, forming a pattern of circles and lenses, which acts as a basic component of the Flower of Life’s design. 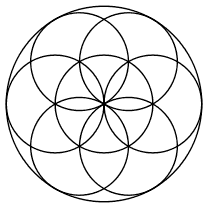 The next step was for the creator to spin the shape on its axes. In this way, a sphere is formed (see diagram).

The creator’s consciousness is said to exist within the sphere and the only thing that physically exists is the membrane of the sphere itself.

This “first step” is not to be confused with the “first day”, the latter being in reference to the seven days of creation. 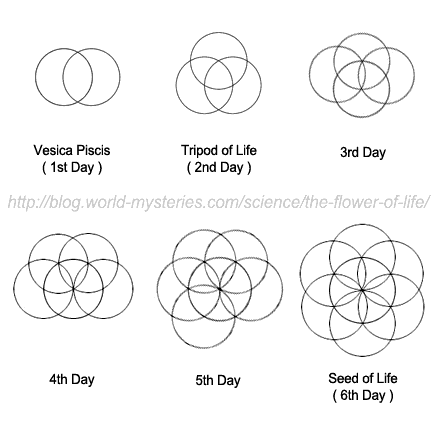 The Egg of Life

After the creation of the Seed of Life the same vortex’s motion was continued, creating the next structure known as the Egg of Life.

This structure forms the basis for music, as the distances between the spheres is identical to the distances between the tones and the half tones in music. It is also identical to the cellular structure of the third embryonic division (The first cell divides into two cells, then to four cells then to eight). Thus this same structure as it is further developed, creates the human body and all of the energy systems including the ones used to create the Merkaba. If we continue creating more and more spheres we will end up with the structure called the Flower of Life.

The Flower of Life

The Flower of Life is the modern name given to a geometrical figure composed of multiple evenly-spaced, overlapping circles. They are arranged to form a flower-like pattern with a sixfold symmetry.  The most common form of the “Flower of Life” is hexagonal pattern (where the center of each circle is on the circumference of six surrounding circles of the same diameter), made up of 19 complete circles and 36 partial circular arcs, enclosed by a large circle. 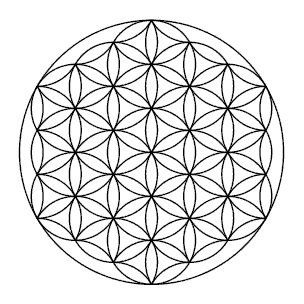 It is considered by some to be a symbol of sacred geometry, said to contain ancient, religious value depicting the fundamental forms of space and time. In this sense, it is a visual expression of the connections life weaves through all sentient beings, and it is believed to contain a type of Akashic Record of basic information of all living things. 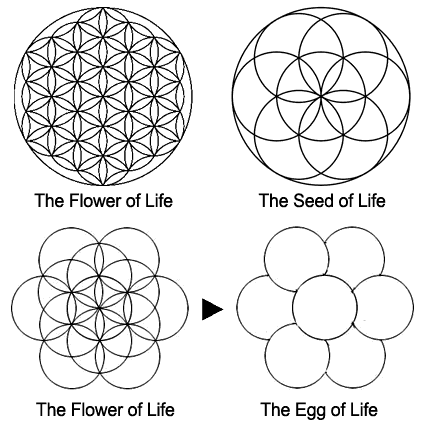 The “Flower of Life” can be found in all major religions of the world. It contains the patterns of creation as they emerged from the “Great Void”. Everything is made from the Creator’s thought.

In the 13th century, a Cabalist group from France succeeded, through geometric interpretation, in dividing the entire Hebrew alphabet into an order using the Seed of Life. The resulting alphabet was remarkably similar to that of the Religious sage Rashi who wrote his commentaries on the Old Testament at that time in France.

The flower of life holds a secret symbols through which one can discover the most important and sacred pattern in the universe. This is the source of all that exists; it’s called the Fruit of Life. It contains 13 informational systems. Each one explains another aspect of reality. Thus these systems are able to give us access to everything ranging from the human body to the galaxies. In the first system, for example, it’s possible to create any molecular structure and any living cellular structure that exists in the universe. In short every living creature. 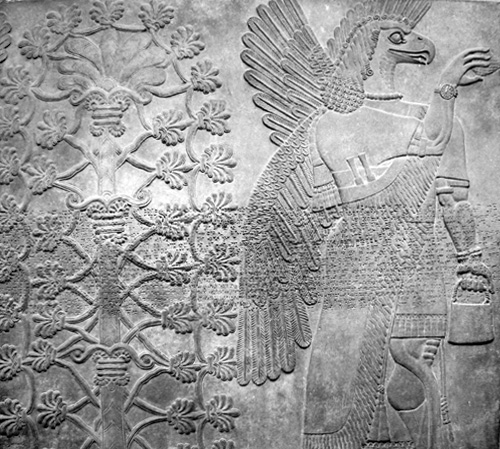 There are many spiritual beliefs associated with the Flower of Life; for example, depictions of the five Platonic Solids are found within the symbol of Metatron’s Cube, which may be derived from the Flower of Life pattern. These platonic solids are geometrical forms which are said to act as a template from which all life springs.

The “Fruit of Life” symbol is composed of 13 circles taken from the design of the Flower of Life. 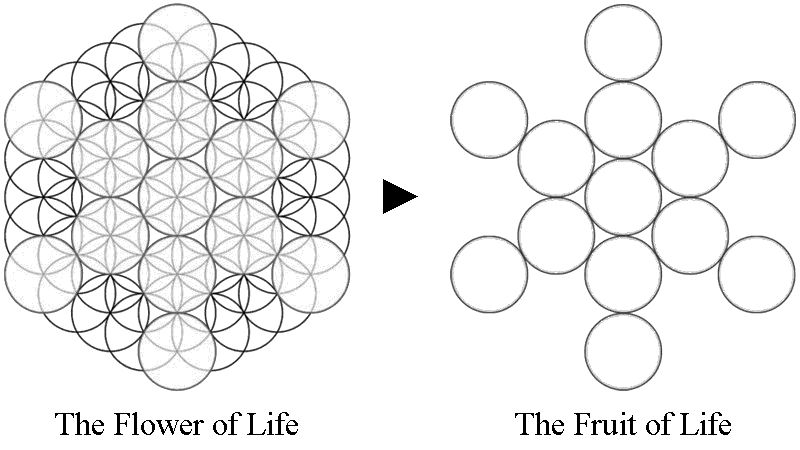 The Fruit of Life is said to be the blueprint of the universe, containing the basis for the design of every atom, molecular structure, life form, and everything in existence. It contains the geometric basis for the delineation of Metatron’s Cube, which brings forth the platonic solids. If each circle’s centre is considered a “node”, and each node is connected to each other node with a single line, a total of seventy-eight lines are created, forming a type of cube (Metatron’s Cube).

The symbol of the Tree of Life may be derived from the Flower of Life. The Tree of Life is a concept, a metaphor for common descent, and a motif in various world theologies and philosophies. This has historically been adopted by some Christians, Jews, Hermeticists, and pagans. Along with the Seed of Life, it is believed to be part of the geometry that parallels the cycle of the fruit tree. This relationship is implied when these two forms are superimposed onto each other. 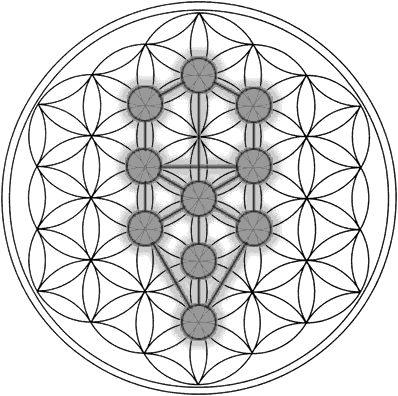 The World Grid: The invisible made visible…

A portion of the world grid, which invisibly encircles the planet. The grid is based on ‘the complete flower of life’ and the hexagon/hexagram. The diameter of the first circle was calculated by drawing a line from Orkney to Stonehenge (coincidently the line happens to pass through Rosslyn chapel which is exactly in the middle, this could be the real ‘rose line’). All of Europe’s ancient sites (stone circles symbolizing the flower) can be found lying on one of these lines. The grid also links all of these ancient sites together. Many of the oldest sacred sites lie at the centre of six points. 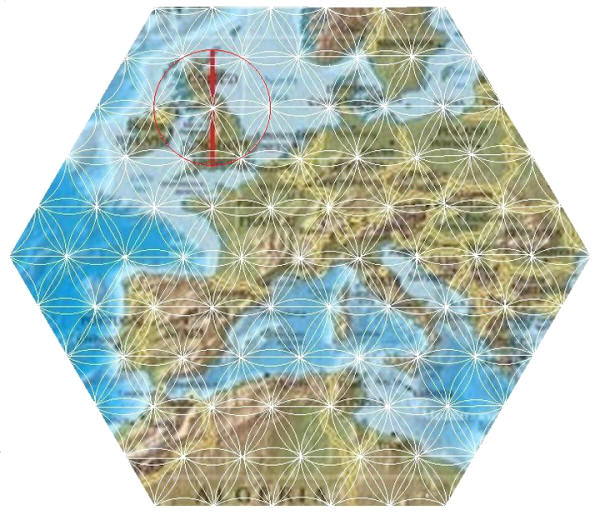 The complete flower of life also contains the three dimensional metatron cube, which holds all the Platonic solids. 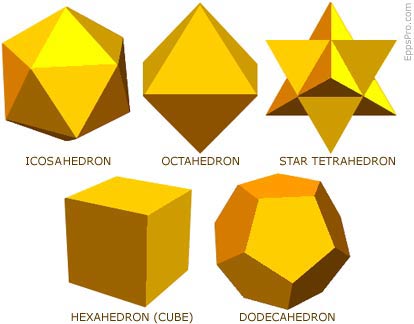 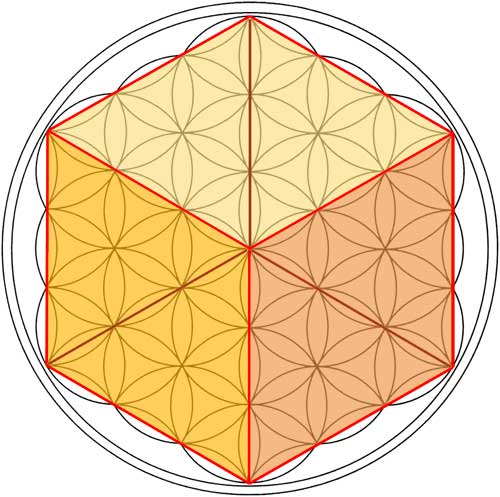 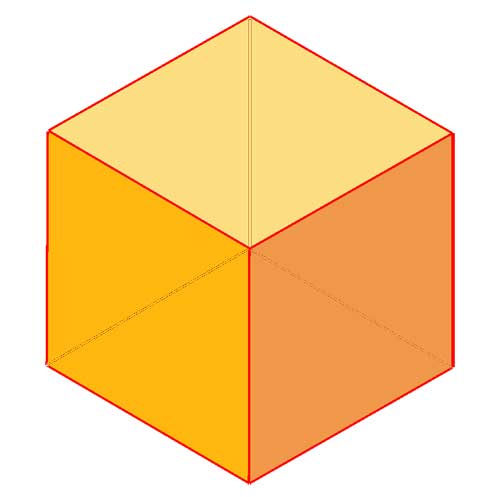 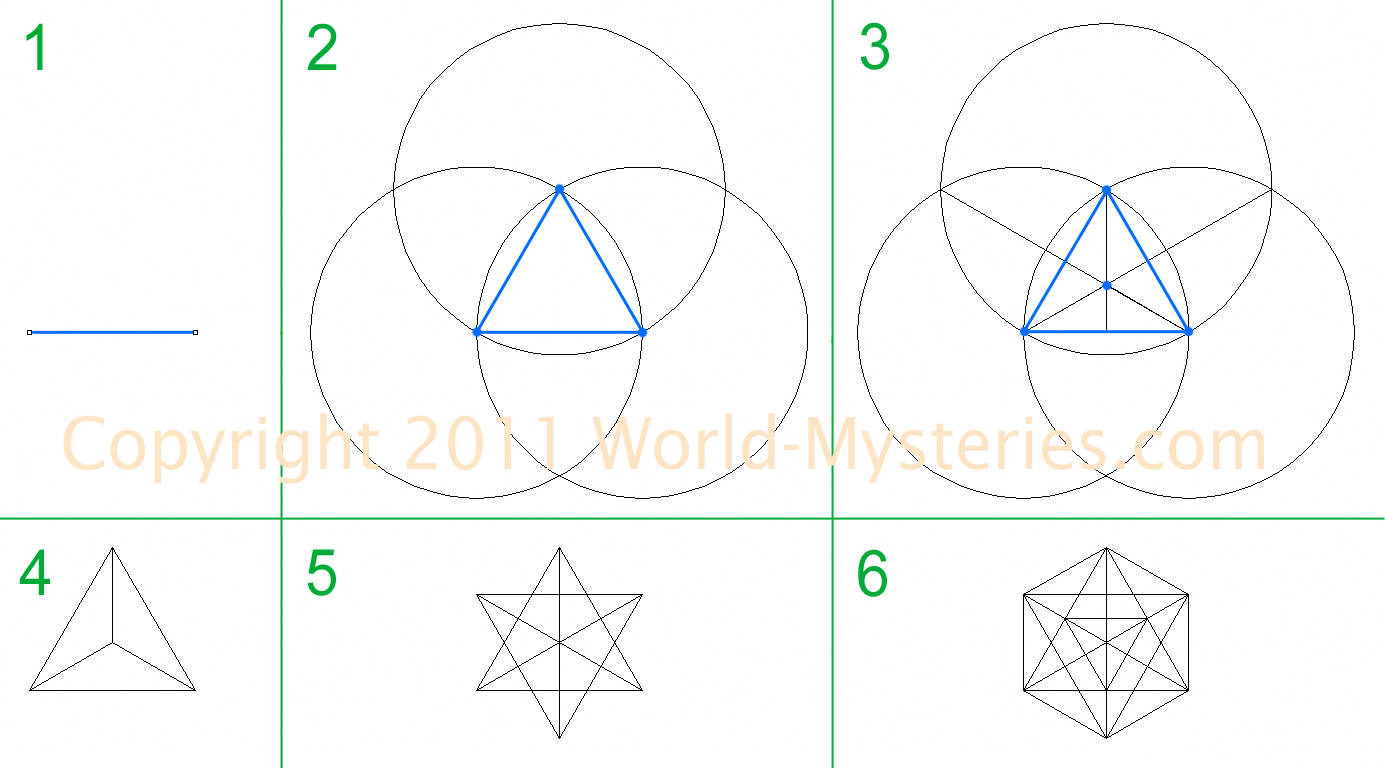