In astronomy and cosmology, dark matter is a type of matter hypothesized to account for a large part of the total mass in the universe. Dark matter cannot be seen directly with telescopes; evidently it neither emits nor absorbs light or other electromagnetic radiation at any significant level. Instead, its existence and properties are inferred from its gravitational effects on visible matter, radiation, and the large-scale structure of the universe. According to the Planck mission team, and based on the standard model of cosmology, the total mass–energy of the universe contains 4.9% ordinary matter, 26.8% dark matter and 68.3% dark energy.

Although the existence of dark matter is generally accepted by the mainstream scientific community, there is no generally agreed direct detection of it. Other theories including MOND and TeVeS, are some alternative theories of gravity proposed to try to explain the anomalies for which dark matter is intended to account.  [ — Source: Wikipedia]

THE DARK SIDE OF DARK MATTER

The Moon and the Dark Matter

The anomaly in the rotation curves for galaxies (excess of speed) is not due to any mysterious dark matter, but rather to the tidal effect of the Universe all around the galaxies themselves.
Here is the proof.

Everybody knows the Moon always shows the same side to the Earth (by everybody I mean 1% of the world population; all the rest, 99%, is interested in other things of the “third rate”, but never mind). As a matter of fact, on the side which is always visible from the Earth, a lot of people wanted to see the image of two lovers who kiss (the Kiss in the Moon); and it seems they are right, according to the comparison you can make between the picture and the drawing below.

Attempts to find human features on celestial bodies have also involved the Earth itself,  for instance, Italy really looks like a boot (a human leg). Moreover, we’ve also been told the nation which is opposite to Italy (on the other side of the Earth) is strangely similar in shape shaped (a boot, but upside down). We are talking about New Zealand. 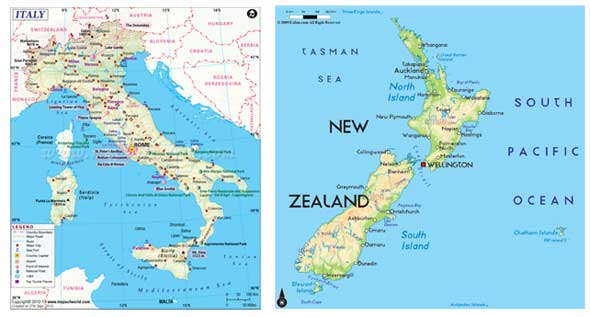 But there is a reason why the Moon permanently shows the same side to the Earth: the tidal force of the Earth on the Moon.
As a matter of fact, such a synchronism between the motion around itself (spin) and revolution around a central body is typical for many satellites in the solar system.
For example, Caronte, which is the satellite of Pluto, moves on a stationary orbit, and it is  not only by showing the same side to Pluto, but, when seen from Pluto itself, it looks still in the sky.
The Sun, would also make the Earth to show the same side, due to its tidal gravitational force, but the distance Earth-Sun is proportionally much larger than that Earth-Moon, so the Sun hasn’t been able to do that, yet.
In practice, with reference to the image below, it’s like if the Earth and the Moon were two dancers, or two ice skaters who, holding each other by hand (due to the gravitational pull) dance together, and so the less massive ends up in showing always the face to his partner, although they both rotate, on the dance floor (or on the rink), and so also around themselves. 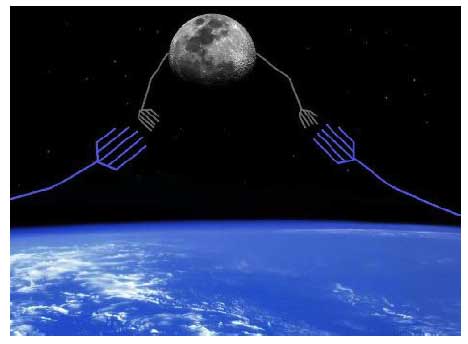 And what does all this have to do with the dark matter?

A lot, as, in my opinion, the extra speed measured on stars spinning around galaxies is really due to the tidal effect exerted by the Universe which is all around! 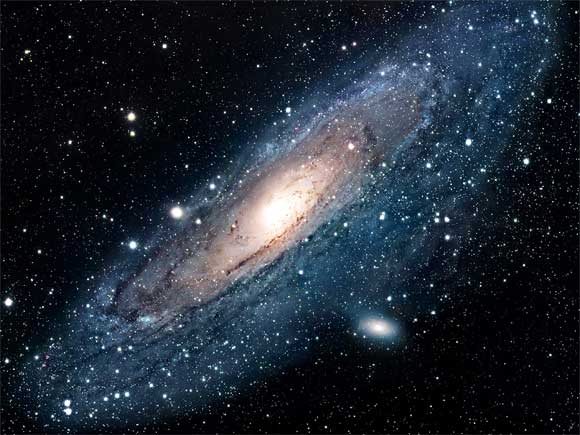 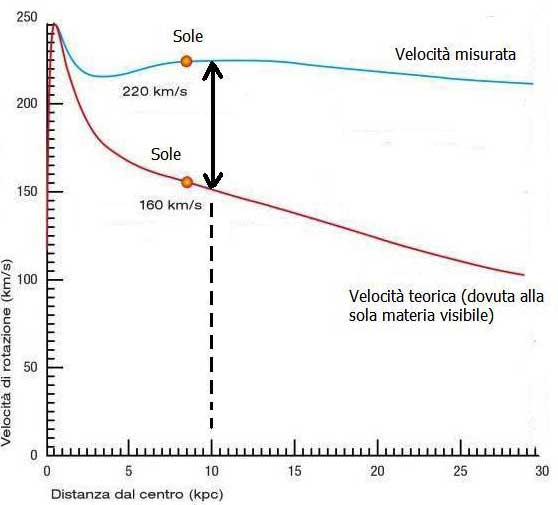 Rotation curve of the Sun in the MilkyWay (captions in Italian are easily understandable, as very similar to English).

The explanation of the official science for the discrepancy is based on assumption of existence  (in enormous amount, much more than visible matter) of invisible matter all around galaxies;  (which is by the way as much  embarrassing explanation as introduction of superluminal neutrinos, of the ultrafunded divine boson, of the cosmic ether, of the dark energy etc) – unbelievable!
And such an matter, they say, is invisible, indeed, as it’s not emitting photons ; but it must be transparent, as it is all around the galaxy, so preventing us from seeing the galaxy by telescopes ; but we can see galaxies very well…Uhm, let’s forget it…

And, by the way, who is going to take care of the mysterious dark matter? The same people (the same teams) who propose existence of the divine boson and of the neutrinos faster than light….

With reference to the graph above, let’s carry out some rough calculations, just to evaluate the size of the problem.
My Universe is collapsing by a cosmic acceleration auniv 7,62*1012 m s2 (see page 12 at the following link: http://vixra.org/pdf/1305.0176v1.pdf  )
Now, we all know that an object which falls from a height h, moves with the gravitational acceleration ( g = 9,81m/s2 ), and will reach the ground with the final speed vf :  vf = sqrt(2gh) ;

which is ineteresingly 220-160=60km/s of  the v of discrepancy, reported by the graph above!
And the exactness of such a formula holds on all the curve; for instance, at 25kpc, you have the difference of v=100km/s!

But, I repeat, all this is about rough calculations! Only God knows exactly as things work.  For sure, not the gentlemen (and ladies) of the mysterious dark matter.

Further scientific peculiarities of our times:

The particle of God they looked for by powerful means, should give mass to particles. Since the beginning, it’s not so clear as it could plausibly give mass to other particles, but even if all what has been said is true, then we would have got rid of a little mystery (the origins of the mass of particles), but we’d also have faced a new and bigger mystery, that is the understanding why such creation of mass occurs and exists. According to  the Occam’s razor, Higgs’ boson will make the Universe more difficult to be understood, in my opinion, rather than easier. And so, for such a Divine Boson, a Nobel Prize for the Physics or for the Chemistry?

In fact, the question arises: by increasing energies and by using more powerful accelerators, will they find more new particles (like chemists, who almost every day invent new organic compounds, of which are millions nowadays.)?
But all this is not the same as to say that such new “creations” give mass to others (!!!) and that these have something to do with the early Universe. On the contrary, all this is similar to saying that in the Universe the hydrogen  comes from uranium.  However, it’s exactly the opposite. On the other hand, some ultra long lagrangians have very little to do with the plausibility and the simplicity of the early Universe.  Poor Occam!

And a lot of years before A. Einstein published his Theory of Relativity, all the Universities, all over the world, were looking for the cosmic ether, as they thought the electromagnetic waves ( and therefore the light itself) should necessarily propagate in a media, just like the sounds propagate in the air. So, they supposed the space was filled with an extremely light and transparent gas, called ether.
And those Universities even calculated very precise values for the density of such an ether!
The Michelson and Morley experiment, made to prove the movement of the Earth through the ether, failed.
The question was solved in 1905 by an employee of the Patent Office in Berne, Albert Einstein, who suggested to cease trying to prove the movement of the earth through the ether, as ether simply doesn’t exist!
I suggest that dark matter we talk about nowadays (so strange, heavy, transparent and simply not plausible), will soon end up like ether!

But history speaks plainly. Especially the contemporary one.

the silence, already fallen down, will ratify:

Thank you for your attention.
Leonardo RUBINO
leonrubino@yahoo.it

Copyright 2013 by Leonardo Rubino
Presented with permission of the author
http://scienzaufficialeattendibilita.weebly.com